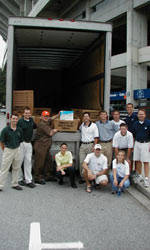 Clemson, SC – Clemson has sold 57,141 season tickets for the 2001 campaign, less than 500 away from the school’s all-time record, Associate Athletic Director and Ticket Manager Van Hilderbrand said on Wednesday. The single season record is 57,625 set in 1988, a season in which Clemson played both South Carolina and Florida State at Death Valley.

Hilderbrand announced that season tickets are still available by calling the Clemson ticket office at 1-800-CLEMSON.

This year’s figure of 57,141 is already the highest total since the 1990 season when Clemson sold 57,396 season tickets. This is just the fifth time Clemson has exceeded the 57,000 season ticket mark. Hilderbrand said ticket sales are still strong and the record could be set by the September 1 opener with Central Florida. Season ticket figures do not include what is allotted to the opposition, or Clemson student ticket sales.

Clemson averaged 78,378 fans per game in 2000, its highest average since the 1990 season. The school ranked seventh in the nation in total attendance and 12th in average attendance for the 2000 season. The 2000 season also saw an average of 11,050 students attend Clemson home games, an all-time record.

Ticket prices for Clemson’s six home games are $25 apiece with the exception of the Florida State ticket, which is $32. Clemson’s away games at Georgia Tech and South Carolina are also priced at $32 apiece. A ticket to the Clemson vs. NC State game in Raleigh is priced at $28, while the games at Wake Forest and Maryland are $25 a ticket.

Kickoff times for the first three games of the season are set for 1:00 PM. The contests with Central Florida (Sept. 1), Wofford (Sept. 8) and Duke (Sept. 15) will have no live television. The kickoff for the Virginia game on September 22nd will be announced 12 days prior to the game, as is the case with the remaining schedule.

The latest parking map for Gameday is now available online: