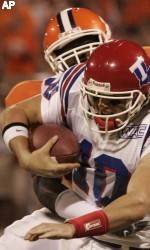 Clemson,SC-Tommy Bowden welcomed back six players who had been in yellow jerseys for much of last week, as the Tigers practiced for nearly three hours on the practice fields behind the Jervey Athletic Center on Monday. The Tigers were fresh after taking Sunday off from practice.

“We had a very good practice today,” said Bowden. “The team went to church in Anderson Sunday morning, then we watched film of the scrimmage in the afternoon. They came back fresh today and it showed.

“It was also good to see the injured players back. When you lose six players it is telling. It made for a crisp practice.” Dorell Scott (sprained ankle), Ricky Sapp (sprained ankle), Jamie Cumbie (shoulder), Antwon Murchison (concussion), Josh Miller (oral surgery) and Landon Walker (knee) all returned to practice on Monday after wearing a yellow jersey much of the week. All but Walker are defensive players listed as first or second team.

The Tigers will hold their final preseason scrimmage Tuesday morning (closed to the public), the last day before the start of school. The team will then begin academic classes for the fall semester on Wednesday. “We won’t practice on Wednesday,” said Bowden. “We want to send the right message and give them Wednesday to get off to a good start academically. So, Tuesday’s scrimmage will be important. It will signal the end of fall camp. We will take Wednesday to meet as a staff and game plan for Florida State.” The Tigers open the season September 3 against the Seminoles.

Bowden talked about the play of a few players after practice, most notably freshman tight end/fullback Chad Diehl and placekicker Mark Buchholtz. “Chad Diehl has really looked good at tight end. He might be the best blocker we have. He is 250 pounds and can really run over people.

“Mark Buchholz didn’t miss a kick in the stadium on Saturday. It is unusual to have an athlete play two sports at the same time, I have never done this. But, I have met with Trevor (Adair, men’s soccer coach) and we have it worked out. It has really worked well so far and I think it will all year.”

Buchholz is in his fourth year as a starter on the Clemson men’s soccer team and is in his first year as the top place kicker on the football team. He is attempting to be the first Clemson athlete to play both sports at the same time since 1982 when Donald Igwebuike did it. The Clemson soccer team is ranked 12th in the nation in the preseason poll.

Bowden also bragged on freshman lineman David Smith of Greenville, SC and Greenville High School. “David Smith had a very good scrimmage on Saturday. After looking at the film we will have a decision to make on him. For a guy who did not get here until August, he has played very well. With the injury to Landon Walker, David has actually had about as much practice time.”