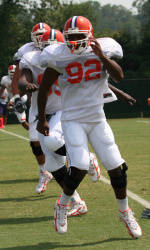 Clemson, SC – Clemson practiced in humid 95 degree heat for two hours and 45 minutes on Thursday. It was a long practice and the Tigers were tired by the end of the workout.

“Today the heat and humidity got us by the end of practice,” said Bowden. “It was a long physical practice. We had a good skeleton passing drill and a good inside drill, but the last couple of periods were difficult for both the offense and defense.”

Bowden is re-evaluating his practice schedule in light of the heat and the long 12-game schedule. “I talked with Frank Beamer at Virginia Tech and Mack Brown of Texas to see how they are practicing in the preseason. Coach Beamer is not doing any two-a-days during the preseason, and Coach Brown had just a couple. He practices the first half of practice outside and the second half in their indoor facility.

“Times have changed. When I was in school (at West Virginia) there were just 10 games. Today there are 12. My freshman year the first game was September 15. We would be just reporting today. Today everyone is on campus by the fourth of July.

Bowden had originally slated Friday to be a two-a-day workout, but he will instead having meetings to go over film with the players in the morning. The Tigers will practice once on Friday starting at 3:00 PM.

Bowden commented on the play of his defensive backs and has also been impressed with the play of bandit end Kevin Alexander. “Crezdon Butler and Chris Chancellor have been the top two cornerbacks so far. Marcus Gilchrist has done the best among the young players. Haydrian Lewis and Byron Maxwell have also done well, but Butler and Chancellor have been the most consistent.

“I have been pleased with Kevin Alexander, he looks good. He has done a good job, especially when it comes to the pass rush. He has very good quickness and good technique. He is picking up the position.” Alexander has been running with the first team as Ricky Sapp has missed the last three days of practice with a sprained ankle.

Running back Ray Ray McElrathbey suffered a knee injury in a non-contact drill. The extent of his injury will not be known until he has an MRI on Friday. McElrathbey had knee surgery during the summer. Running back James Davis and offensive tackle Christian Capote both missed the practice with shoulder injuries, but both are expected back on Friday.