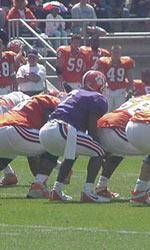 Clemson, SC – Clemson continued its two-a-day marathon on Friday. It was the fifth straight day of double practices for Tommy Bowden’s Tigers. Bowden cut back a bit on the length of the practice in the morning as the Tigers worked just two hours and 15 minutes, then worked for just an hour in the afternoon as lightning chased the Tigers off the practice field.

Much of the time on Friday was spent with the coaches analyzing film in preparation for a stadium scrimmage on Saturday. The Tigers scrimmage on Saturday is closed to the public and the media. “We will keep the coaches off the field as much as possible for Saturday’s scrimmage,” said Bowden. “We want to see if the offensive linemen can make the right calls. We want to see if the defense can make the proper adjustments. This will be even more important than last year when we had a more veteran offense.

“That was two scores by the defense, and that was good to see,” said Bowden. “I don’t like the turnovers by the offense, but to see the defense score was important. We haven’t had a lot of defensive scores the last three years.”

Derrick Hamilton also made some big plays for the offense, as did quarterback Willie Simmons. “We played two true freshmen on the offensive line with the second unit and they played well. Nathan Bennett and Roman Fry did a good job, they made the most of an opportunity.” Cedric Johnson suffered a shoulder injury during the morning practice, leading to the increased playing time for Bennett and Fry. The injury is not serious.

As was stated in a previous release, defensive tackle Nick Eason missed both practices as he undergoes some tests for an irregular heart beat. Dustin Fry continued to miss practice due to a dislocated kneecap. Todd McClinton, Eason’s backup on the depth chart, missed his third straight day with a pulled hamstring. Tye Hill pulled a hamstring in the morning workout and missed the afternoon practice, while Cedric Johnson had a stinger in the morning and missed the afternoon practice. Kevin Youngblood continues to improve, but was held out of scrimmage action due to a sprained foot.

Bowden also said that freshman running back Duane Coleman will be attending Clemson. Coleman is a 185-pound running back from Naples, FL who rushed for 2814 yards and had an amazing 11.4 yards per carry as a senior last year. He scored 40 touchdowns in leading his school to the Class 5A State Championship of Florida. He had 203 yards rushing in the state championship game.