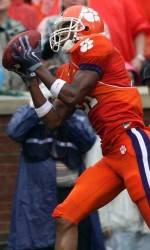 Between practices, film sessions, team meetings, games, and going to class, college student-athletes have to learn to use their time wisely. With that comprising much on “their plate,” most athletes would not be willing to give up what little free time they have to help in their community. Clemson wide receiver Xavier Dye is not “most athletes.”

“In order to be considered for this team, each player must be “actively involved and committed to working with charitable organizations, service groups, or community service while maintaining good academic standing,” according to AFCA.com. “Candidates must also display sincere concern and reliability, while also having made a favorable impression on the organizations with which they are involved.”

“It is an honor to be on this team and I think that it’s great to do something you really enjoy doing,” said the junior from Greenwood, SC.

Dye has been involved with many community service projects since he enrolled at Clemson in January, 2007 after graduating early from James F. Byrnes High.

“I really got started through our Spiritual 2-A-Days program when I arrived at Clemson, and I have stayed fully involved every year since.”

Since beginning his community service projects, Dye has accumulated a lengthy list of different types of activities, both on his own and through different groups. These include Speak Up for a Child Gala, Boy Scout Day at Clemson, men’s clinics in Mauldin, Walhalla, and Greenville, a Fellowship of Christian Athletes mission trip to New Orleans, LA in 2008, and tutoring a middle school student in Clemson once a week.

“I really enjoy going to nursing homes and schools,” said #21. “I feel like I can always lift these people’s spirits with an encouraging word. I also enjoyed the FCA mission trip to New Orleans, where we helped people who were still being affected by Hurricane Katrina.”

Among other student-athletes named to the AFCA Good Works Team was Florida quarterback Tim Tebow, who is nationally known for his many community service projects and mission trips. “Being on the same team as a guy like Tim Tebow is something you never really think about, but I’m sure he is also honored to be recognized. But one day I’ll be able to tell my family that he and I were on the same team.”

The award is an even more prestigious honor for Dye because he was selected out of a record 106 players nominated by sports information directors on behalf of their schools over the summer. Dye is the only junior on the team and one of only two non-seniors (the other is UCLA sophomore running back Derrick Coleman).

All 22 of the student-athletes named to this team were chosen because of the impact they have made off the football field.

“Allstate has been inspired by the commitment and sacrifice that these student-athletes have made to better our communities and improve the lives of our neighbors,” said Lisa Cochrane, vice president of marketing for Allstate.

“These 22 student-athletes represent thousands of college football players who make a difference in their communities through volunteer service on campus and in their hometowns,” added AFCA Executive Director Grant Teaff. “We’re proud to join Allstate in recognizing these young people who are dedicated to improving the world in which we live.”

“It’s important to set a good example for your teammates and for younger kids, since most of them look up to college athletes,” added Dye. “We have a big impact on them.”

With all of his work in the Clemson area and surrounding communities, Dye has become a great role model and representative for Clemson University.