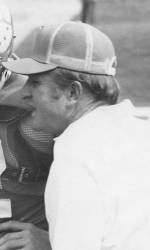 It started innocently enough…we were just trying to catch up with an old friend. Today, it is an event I cannot possibly forget.

The day was October 26, 1977. I was Bob Bradley’s assistant in the sports information office (Tim Bourret replaced me in September of 1978). We were in the middle of a football season, but I remembered that this was Coach Red Parker’s birthday. He had been dismissed as the Tigers’ head football coach the previous December. However, Coach Parker is just one of those guys who is impossible not to like.

So, that morning, I asked Mr. Bradley if he wanted to call Coach Parker and sing “Happy Birthday” with me. He cracked a big smile, and we were on.

After what I am sure was a tough rendition of “Happy Birthday,” Coach Parker said, “Who is this?” When Mr. Bradley told him, we all had a good laugh and wished this wonderful man the best.

You are probably wondering how I can remember Coach Parker’s birthday. It certainly started in a dubious way. During the 1974 football season, October 26 fell on a Saturday when the Tigers played at Tennessee.

It was a beautiful fall day that began with so much promise, as the offense was in high gear with scoring passes to All-America tight end Bennie Cunningham. It was an offensive show on both sides.

The game came down to a late Volunteer touchdown and then a try for a two-point conversion. Condredge Holloway, Tennessee’s outstanding quarterback, was able to elude the pressure and find Larry Seivers in the back of the endzone. Those two points (scored with what appeared to be the entire Volunteer offensive line illegally downfield in the endzone) gave the Volunteers a 29-28 victory.

I was standing under the goalpost as the two-point play unfolded. I walked into our dressing room after the game and saw the looks on the players’ faces. Through it all, I was amazed at how Coach Parker handled all of this with such grace…and it was his birthday. You are not supposed to have this kind of disappointment on that day.

As you can imagine, October 26 was burned into my memory.

Coach Parker’s days at Clemson were fun ones for me. I was a student during his first few years and I loved being around Mr. Bradley and Jerry Arp. Coach Parker was icing on a great cake for me. He came to Clemson following the 1972 season and brought with him an exciting offense, one that led the Tigers to a 7-4 record in 1974, including home wins over Georgia and Georgia Tech.

During his four years, the names Bostic, Butler, Fuller, Kenney, and Scott were some of the players who became Tigers. They took a program that had suffered some down years and brought it back.

He was not the head coach during the 1977 turnaround season, nor was he there for the ACC Championship in 1978. But if you ask Danny Ford, he is quick to give Coach Parker credit for the program he walked into. Without those players and the national exposure they brought, the path to the 1981 national title may not have gone through Tigertown.

Today, Parker is battling another opponent – Alzheimer’s disease. His wife, Betty, has the awful disease, and most of his days are spent taking care of her. For those of you who know him, it is not surprising to hear of his commitment to his wife of 59 years. Coach Parker has also had some health issues, struggling with his heart. However, when I talked with him a few weeks ago, he sounded like he was on the mend. We certainly pray he is.

I must admit that I have not called him every October 26, but we have kept in touch and our paths have crossed now and then.

As Tim Bourret, Sanford Rogers, and I were waiting for the game to start, Coach Parker walked into the press box. He looked like he could have put on the coaching gear and gone down to the sideline.

He had been in North Augusta to see his grandson play a high school game the night before and he just could not pass up the opportunity to see the rivalry game in person. I asked him if he had anyone to sit with, and when he said “no,” I told him to sit with us. That game was so enjoyable, but having him sit with us was so much more special.

I know each of us have days we remember every year. For me, October 26 is right near the top. Over these 37 years that have passed since that fall afternoon in October of 1974 in Knoxville, the memory of the loss has been glossed over by the friendship and admiration for Coach Parker. This is one of those really special people who, if you are fortunate, pass your way.

So, Coach Parker, October 26 is coming up in a few weeks and I can’t wait to hear your wonderful voice. Hard to believe this will be your 80th.