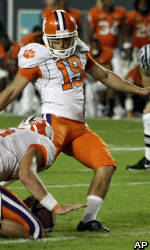 Growing up less than an hour from Clemson, Richard Jackson has always been a Tiger fan.

Growing up a Tiger fan, it was an easy decision for the Greer, SC native to come and play football for his childhood favorite. “I really don’t know anything different than Clemson, and I wouldn’t have it any other way than to be playing here.”

Jackson came to Clemson after a highly-decorated career at Riverside High School. As a junior for the Warriors, he was 8-11 on field goals with a long of 50 yards while also averaging 44 yards per punt.

During his senior season, Jackson made national headlines. In a 20-16 win over perennial state power Union County High School, Jackson nailed a state-record 64-yard field goal that made SportsCenter’s top plays on ESPN.

When looking back on that kick, Jackson recalled it was a “dream come true.”

“It was a kick that we needed in the middle of the game, and it helped us to one of the biggest wins in Riverside High history at the time, so to be a part of that was something really special.”

Jackson also garnered plenty of accolades on the state and national level. He was named the South Carolina High School Coaches Association Special Teams Player-of-the-Year and one of the top kickers in the nation by all the recruiting services. The first Parade All-America kicker at Clemson since 1988, Jackson chose the Tigers over top programs such as Georgia, Louisiana State, Maryland, and Texas A&M.

The first few years at Clemson were not quite what Jackson had in mind when he decided to be a Tiger. After red-shirting in 2006, Jackson spent the next two seasons as a backup and appeared in just five games. During those games, he made two PATs and booted three kickoffs.

At the end of the 2008 season, he found himself academically ineligible for the Gator Bowl against Nebraska.

“I was in a hole, a hole that I dug, and it was about as deep as you could imagine,” admitted Jackson. “I couldn’t even see the top.”

During that time, many thought Jackson’s Clemson career would come to a premature end, including his head coach. “I had bought him a ticket to put him on the first bus out of here,” said Head Coach Dabo Swinney. “I drew a line in the sand and said, `You won’t be here unless you accomplish this, this, and this’.”

Jackson used the 2009 season to quiet his detractors, both on and off the field. Throughout the season, he set or tied four Tiger records. Then in May, he received his degree in economics.

After winning a close battle in fall camp with Spencer Benton, Jackson opened the 2009 season with a 3-5 performance against Middle Tennessee, with both misses from 45+ yards. He then was on the top of his game during the next two contests.

In his second game as a starter, at #13 Georgia Tech in a nationally-televised ESPN Thursday night game, Jackson drilled a 53-yarder with at least 10 yards to spare early in the fourth quarter. The 53-yard field goal was the longest by a Tiger in 17 years.

Jackson was named the Tigers’ special teams player-of-the-game for his performance. Even though Clemson suffered a narrow defeat, Jackson looked back on that game as his most memorable in a Tiger uniform.

“It was an intense game, the crowd was loud, and we had the great comeback,” said #19. “It was an exciting game the whole time, and I was able to play a big part.”

The next contest was at home against Boston College and it was played in a torrential downpour for most of the game. Jackson put himself in the Clemson recordbook multiple ways. He made field goals of 23, 33, 32, 52, 42, and 35 yards to become only the second Tiger to go 6-6 in a game. He was also the only player in the nation to make six field goals in a game in 2009. For his efforts, Jackson was named the Lou Groza Award National Player-of-the-Week, ACC Specialist-of-the-Week, and won the O’Rourke-McFadden Trophy as the MVP of the game.

Two games later at Maryland, Jackson again hit a 51-yard field goal to give him three field goals of at least 50 yards, a school record for one season. He finished the season 20-31 on field goals, with eight of the 11 misses from 45 yards or longer. With 41 PATs, he became only the fourth kicker in Clemson history to score at least 100 points in a season.

Entering his senior season, Jackson again found himself in a battle for the starting placekicker position. Even though Chandler Catanzaro was named the starter, Swinney told Jackson he is key to the team’s success.

“Richard is a valuable member of our team,” stated Swinney. “I wouldn’t be surprised if at some point this year he steps up and comes through for us in a key situation.”

Looking back on his time at Clemson, two things stick out to Jackson…being a part of the program and the away games he has traveled to.

“It has been great to live and work in such a unique place like Clemson, a place that has so many memories for so many people. You get to meet the all-time greats, national champions, and All-Americans. There is so much history here, and being a football player, you get to have your own little place in that history.”

The other aspect of donning the orange and white has been going on the road for games. “It is great to go on the road and see our fans take over a stadium because they are so passionate. When we win a big game, like at Miami (FL) last season, you get to go to your little corner of the stadium and celebrate with teammates and sing the alma mater. It is something I will always remember.”

Another highlight at Clemson has been playing alongside his best friend, fellow graduate Michael Wade, who just happens to be the Tigers’ first-team holder. They met in high school and knew from the beginning that they were a lot alike, as they quickly became friends and teammates, playing every sport together through high school. When talking about being teammates at Clemson, both players called it a “dream come true.”

“He really is like a brother to me,” said Wade. “We bicker and fight some, but when it comes down to it, we always have each other’s backs and would do anything for the other.”

Looking at what Jackson has endured during his time at Clemson, both Wade and Swinney were highly complementary. “I can’t say enough about his ability to hang in there,” said Swinney. “He did everything that has been asked of him on the field, got back on track academically, and graduated. I am really proud of him for that. He has developed into a good young man.”

Wade echoed Swinney’s thoughts. “It has been great to see him overcome the things he has gone through and still be ticking. Hopefully, this last year we can finish up strong together and finish this journey out.”

With graduation behind him and his college career coming to a close, Jackson would like to pursue a job in the real-estate business with an emphasis in either development or financing. As for his football career, he would like to “go out with a bang.” And for those who know Jackson, that should come as no surprise.