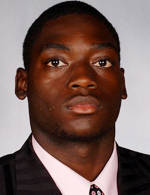 For linebacker Jeremy Campbell, the 2009 season has marked a turning point in Clemson football. Not only is it his senior season, but he and the Tigers are in the driver’s seat for their first ACC Championship game appearance. For a player who strives to put the team first, there is nothing more exciting than that.

Campbell is one of the many Tigers on the roster from the state of Florida. Other prominent seniors from the Sunshine State are Kevin Alexander, Chris Chancellor, Kyle Parker, and C.J. Spiller.

The native of Port Orange, FL was a standout linebacker at Spruce Creek High School and the #53 outside linebacker in the nation by Rivals.com. As a senior, he had 90 tackles, 14 tackles for loss, and seven sacks and was also the team captain. He was the team defensive MVP both as a sophomore and senior and totaled seven career interceptions, three of which were returned for scores. Campbell was also a standout in the classroom, as he was named to the honor roll every semester of high school and was also honored as the Scholastic Athlete-of-the-Year by the Rotary Club of Port Orange.

Two deciding factors made Clemson the right choice for Campbell after high school. Firstly, he did not want to attend a university that any former teammate of his had chosen…he wanted to make his own path.

Secondly, the atmosphere at Clemson was second-to-none. “I wanted to remain close to home, but the main reason I came to Clemson was because of the players. They made me feel welcomed and I felt like I was with family the entire time I was here.”

Campbell started the 2006 season playing as a true freshman and played 10 games as a second-team linebacker. His best game came in the season-opener when he had a season-high six tackles and one tackle for loss in 27 snaps. He totaled 106 snaps on the year. Not red-shirting meant that Campbell had an immediate role to play for the Tigers.

Campbell continued his steady role as a backup linebacker over the next two years. His first career takeaway came in the contest at Duke when he had a recovered fumble. His productivity increased as a junior in 2008 when he registered 31 tackles after totaling 26 combined tackles in his first two years.

The thrill of playing his position is what makes #48 so excited to contribute to the game. “Playing the linebacker position on defense is just like playing quarterback on offense. You have to be in total control of not only yourself, but also your teammates. Linebackers have to get everyone lined up and relay the calls. The best thing about it is always being in the middle of the action.”

Campbell’s favorite game thus far in 2009 has been the overtime win at #8 Miami (FL). “Being from Florida, I view playing any Florida school as a rival game and those games are the best. People from Clemson love playing South Carolina, and I love playing teams from Florida. My favorite Clemson moment was beating Miami in overtime this year. I grew up a huge Hurricane fan my entire life, so having a chance to play and beat them really meant a lot to me. It was even more special to beat Florida State this season as well.”

Campbell credits his dad as his strongest influence throughout his career and someone who has supported him no matter what. As a senior, he is now providing that support for his younger teammates. The team named its five team goals before the season started and, with one down and four quickly approaching, it has the right mindset to go all the way.

The goals are to 1) win the opener, 2) win the ACC Atlantic Division, 3) win the conference title, 4) win the state championship over South Carolina, and 5) win the bowl game. As a player, Campbell always puts his team first. Doing so has helped the Tigers come as far as they have and get ready to take on even more.

“This season is special to me because it is the last season I am going to be with my brothers,” said Campbell. “The memories we have made will never be forgotten.”

Campbell will graduate in May with a degree in management. The possibilities are endless for this young man, who is determined to achieve the remaining team goals before his college career is over. No matter what happens, it has all been worth it.