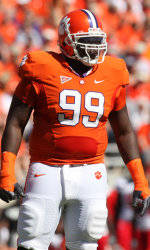 For many student-athletes in today’s culture, college is a means to an end…a way to get to the professional ranks as quickly as possible. It takes maturity for someone to know when he or she is not ready to take that step.

Luckily for Clemson, senior defensive tackle Jarvis Jenkins has that kind of maturity, as he rebuffed the NFL and chose to spend his senior season playing in Death Valley.

“I still had a lot of growing up to do,” he admitted. “I can still improve my technique and I wasn’t satisfied with my projected draft spot. I told myself that I’m a better player than that. I wanted to accomplish more things, have a senior year, and run down the Hill for the last time. I wouldn’t have gotten to experience Senior Day. I felt like I had a lot more to prove.”

The 6’4″, 315-pound behemoth has approached things with that mentality ever since he arrived on campus as a freshman prior to the 2007 season. A local product who starred at nearby D.W. Daniel High School, Jenkins did not have to leave his hometown to play college ball. He was so sure Clemson was the right place for him that he cut off his recruiting and committed to the Tigers during the summer before his junior season.

“I grew up around here and went to Daniel (High),” the Clemson native said. “Running down the Hill was something special. That wasn’t the only reason. The education and the chance I had to play were good, too. When I came in, there were juniors and seniors that were about to graduate, which gave me the opportunity to play.”

Jenkins’ career got off to a good start when he registered a sack in only three snaps in his first game, a nationally-televised Labor Day showdown against #19 Florida State. But things soon got tougher, as blown assignments and a lack of conditioning became a frustration for him. Looking back on it, he said it was a valuable experience.

“I had a lot of busts,” stated Jenkins. “I was getting frustrated with coaches staying on me, which is going to happen when you’re a freshman. I had a lot of things on my mind with school and was battling for playing time. I actually broke both of my wrists that season. The hardest thing about being a college student-athlete is overcoming obstacles. I think I did a good job.”

Becoming a better-conditioned athlete has been a goal that Jenkins has pursued throughout his collegiate career. He has tried different workout plans and diets to ensure that he is consistently entering fall camp in better shape. This season, he has been pleased with how his body has held up so far.

“When I came in here, I was about 335 pounds,” said #99. “The conditioning was hard for me. When they put me on a strict diet, I saw how fast I lost weight. I never did that in high school, so it was new for me. I didn’t know that you could lose weight that fast. As I went along in my career, I started to do some of that on my own.”

Some of the benefits of good conditioning began to show during Jenkins’ sophomore campaign when he started 11 games, totaled 36 tackles, including 10 for loss, and had a pair of sacks.

When Dabo Swinney took over as the full-time head coach following the 2008 season, he brought in several new defensive coaches to transform the group into an attacking unit. Among his hires was Defensive Coordinator Kevin Steele, who arrived with an impressive pedigree of developing NFL talent. Upon doing some research, Jenkins knew he would be a perfect fit for the new system.

“I watched Alabama’s defense with Coach Steele and saw the defensive tackles and what they did. I knew we were going to have an attacking defense, which is what I wanted. This defense is about blowing it up and getting into the backfield. If you teach that to a defensive tackle, that’s all you have to ask for from him.”

Another one of Swinney’s hires was Defensive Tackles Coach Dan Brooks. After initially being excited about Brooks’ ability to prepare him for the next level, Jenkins now sees him as a father figure who has taught him valuable lessons about life and football.

“Coach Brooks taught me, like he taught Albert Haynesworth and everyone else, that the key to beating a double team is being physical, taking an attacking step, and blowing offensive linemen up,² explained Jenkins. “One thing he’s preached to me is that if you want NFL scouts to look at you, you want them to turn on the film and see you first. It’s obvious when you see someone blowing up an entire offensive line.”

After a junior season in which he started all 14 games and totaled 69 tackles, including 11 tackles for loss, Jenkins began to take a look at what pro scouts were saying about him. The feedback he received was not bad, but it was not good enough for Jenkins to pass up the opportunity to spend one more season donning the orange and white. In fact, the doubters who gave him unsatisfactory projections provide the fuel that Jenkins uses every play, in practice and on gameday.

“I practice hard, I play hard, I lift hard, and I go to these draft websites and see guys I think I’m better than that are ahead of me,” he said. “It ticks me off and I go prove I’m better the next week. It’s a motivational thing for me. Every player has something that motivates him to practice harder, and that’s it for me.”

Jenkins has found an assortment of ways to assert himself this season. He already has doubled his previous career high for quarterback pressures with 16 this season and is atop the all-time blocked kicks list with four in his career. He is also fifth (a high position for a defensive lineman) on the team in tackles (51) in 2010 and is second on the team in tackles for loss (9) despite missing the Presbyterian College game due to an injury suffered in the season-opener. Now, Jenkins is back to being productive after tweaking his approach to the game.

“I was trying to find plays rather than letting plays come to me,” he admitted. “That’s something Coach Brooks and Coach Steele have talked to me about. They felt I was trying too hard to make plays. In the Georgia Tech game, I decided to calm down and let it happen. I played my technique and plays started coming to me.”

As he prepares to take the field for the final time in Memorial Stadium, Jenkins can look back on his career and say it was a successful one. As he looks ahead to graduation and his NFL career, the defensive tackle knows he has plenty of opportunities for a successful life. Still, Jenkins has some unfinished business left with the Gamecocks that he hopes to take care of today.

“It’s going to be hard to know that that’s my last time running down the Hill,” said the sociology major. “It had to come some time, but I didn’t think it was going to come this fast. I don’t know how I’m going to react when I get on the Hill. I’m anxious to see.”

Make no mistake, in both spirit and stature, Clemson will have a huge hole to fill in 2011 without Jarvis Jenkins.