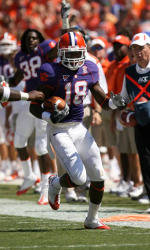 Clemson fans know of Crezdon Butler as a staple at cornerback in Death Valley over the past four years. Entering this season, his 10 interceptions were tied for the most among active ACC players. If Butler, who was on the preseason Thorpe Award Watch list, totals 80 more interception return yards he will break the school record in that category (he currently is third).

With all of these credentials and more, most would think that Butler has trained at this position for most or all of his football career. However, he excelled on the offensive side of the ball before ever playing defensive back.

Butler first played football on the “midgets” Little League squad in Asheville, NC in fifth grade. He started out as both a tight end and a linebacker. Then in high school, Butler became a record-setting quarterback and running back.

“I played running back as a freshman and sophomore, then I played quarterback my junior and senior year,” he recalled. “We made it to the fourth round every year, and then my last year we won the state title.”

Before coming to Clemson, Butler played both ways for his Asheville High School team. Rivals.com rated him as the #14 cornerback in the nation, as he totaled 62 tackles, seven interceptions, eight pass breakups, and two caused fumbles in his senior season. As a quarterback, he passed for 750 yards and five touchdowns and rushed for 1,435 yards along with 16 touchdowns.

Butler earned MVP honors of the North Carolina state title game in 2005 after he recorded five tackles, an interception, and a caused fumble as well as throwing a 70-yard, game-winning touchdown pass. He holds the all-time rushing record at Asheville High with 5,030 career yards, over 1,000 yards more than its previous recordholder, the legendary Charlie “Choo Choo” Justice, who went on to a Hall of Fame career at North Carolina. Butler finished his high school career with 60 rushing touchdowns and 12 interceptions.

Switching to cornerback full time in college, however, was an easy decision for the 6’0″, 185-pounder. “My size at quarterback wasn’t a good college size. For a defensive back, I was above average in the size category, so I switched over. I played some corner my junior and senior year of high school, but I really didn’t take it that serious. I had to play both ways at my school because we only had about 35 players.”

Butler’s college choices came down to Clemson and Georgia, though the deciding factor came in that he wanted to try his luck full-time on the defensive side of the ball. “It was between Clemson and Georgia. I’m glad I picked Clemson because Georgia wanted me as an offensive player, but I didn’t see myself playing on offense in college. I wouldn’t change it. I’m having a great time here.”

Butler, whose initials (CB) are also those of his position, began his Tiger career as a true freshman in 2006. That season, he tied for the team lead in interceptions with three. Although he did not start a game as a freshman, he played in all 13 contests on defense.

His best game in 2006 came against Louisiana Tech, when he had five first hits, two interceptions for 35 yards, and one pass breakup. Butler became the first Tiger freshman to tally two interceptions in a game since 2002 and only the fifth Tiger freshman to ever accomplish that feat. Against #13 Georgia Tech, he had four tackles and an interception in the game that was televised nationally by ESPN. That season, he played 248 snaps and totaled 34 tackles. He was also named first-team freshman All-ACC by Sporting News.

In 2007, Butler continued his growing role as a part of the Tigers’ secondary. He started all 13 games and again tallied three interceptions on the year (one each against Furman, Maryland, and #21 Auburn). Butler had eight tackles at Georgia Tech and seven versus Louisiana-Monroe. He was seventh on the team in tackles (61) and played 593 snaps.

The attention that comes with the cornerback position comes hand-in-hand with an equal amount of criticism. When a score is given up on his coverage, Butler keeps in mind that there are many factors that contribute to this and does not let it affect him.

“You have to know that some coaches call for other people to help out in different coverage situations,” explained #18. “As a defensive back, you have to have the mindset that you have to move on to the next play. People are going to catch passes. Otherwise, they aren’t supposed to be playing in college. That’s definitely the mindset of a DB. We’re out there by ourselves. On some coverages, we might not have any help, and then it’s basically one-on-one, man-to-man. It’s a hard position, but it’s our responsibility.”

The 2008 season saw Butler in a starting cornerback role for every game. He totaled four picks and 142 interception return yards on the season, third-most in school history. He had a season-high eight tackles and an interception against N.C. State and two tackles along with a pass breakup at Wake Forest.

Butler’s best game was versus Virginia when he had seven tackles, one tackle for loss, and a 31-yard interception return that set Clemson up for a score that put the game away. He had his first career sack against South Carolina along with a caused fumble. He even saw time as a punt returner that season, against both Duke and The Citadel.

The interceptions from the past three seasons have positioned Butler third in school history in interception return yards with 196 (trailing last year’s defensive captain Michael Hamlin and Rex Varn). With 80 more yards in that category, he can stand alone.

“You always want to leave your name somewhere in the recordbooks…that would be nice, but I have to get my hands on the ball first!” exclaimed Butler.

In the last two years, Clemson’s defense has finished in the top 10 in the nation in scoring defense due in large part to Butler’s efforts. He has played 44 consecutive games, 31 of which have been starts.

In 2009, Butler has a new position coach in Vic Koenning). Coach Koenning was the defensive coordinator and he played linebacker in college. Coach `Cheese’ (Harbison) knows a lot about defensive backs. He can give us more info because he played the position.”

This season, Butler has continued his job as a starter and has become a leader in the secondary. He is a reason Clemson continues to rank in the top 20 in the nation in many defensive areas. He has just 10 tackles so far this year because opposing quarterbacks are not throwing his way. Opposing quarterbacks have thrown to the man he was covering just five times in the first five games. Despite those facts, he is tied for the team lead with three pass breakups.

Butler has garnered national attention for his skills at the defensive back position and consequently is considered a highly-rated pro prospect. His reviews only make him take his role as a shutdown cornerback that much more seriously.

“Being rated up there with the top corners in the country makes you come prepared every week,” remarked Butler. “It is a motivation for me, but it also makes the opposing wide receivers play their best. Chris Chancellor and I have to play hard and know we’re going to get everyone’s best so they can prove a point.”

When asked if he still thought of lining up on offense, a huge grin spread across his face.

“I always want to touch that `rock.’ I made plays in high school, and I wouldn’t mind seeing what it’s like to make some plays on the offensive side in college. But we have some great players on offense. I just have to get my hands on it on defense.”