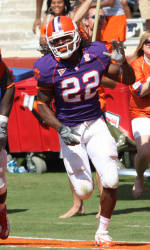 Over the years, Chris Clemons has proven to be a fearless player. He is never afraid to make a tackle no matter who is running at him. His determination and love for the game gives the Tiger secondary a veteran on a mission to win an ACC Championship. His work ethic and positive outlook aid in the many goals the team plans to accomplish this year.

Raised in Arcadia, FL, Clemons was always involved in athletics from a young age. He played in elementary and middle school recreation leagues. His favorite sports were football, track & field, and basketball. He grew up in a large family with two older brothers to look up to for motivation and support.

“My brothers were always there to show me the ropes when it came to athletics,” said Clemons. “They were two of my biggest mentors.”

Clemons also looked up to his mother and grandmother for emotional support and direction. They always made sure he was focused on both school and athletics. Their guidance has been very influential to Clemons’ demeanor and positive attitude.

“If it wasn’t for my mother and grandmother, I don’t know where I would be today,” stated Clemons. “They have shaped the person I have become today. I credit a lot of my work ethic to them.”

Growing up, athletics gave Clemons a hobby that soon became more serious as he grew older. As he advanced to the high school level, his size, speed, and overall athletic ability increased.

“I didn’t really consider how good I was until high school, especially when I was starting to get scholarship offers,” recalled Clemons. “It was kind of surreal for me, because it’s so hard to get the opportunity to play for a Division I school that I felt accomplished when I did get the offers.”

Clemons was a remarkable athlete in high school, showcasing his quickness and strength on the gridiron. He played on both sides of the ball at DeSoto High School, as a running back and cornerback for the Bulldogs. He rushed for 1,242 yards on 193 carries in his high school career.

As a senior at DeSoto High, he averaged 6.4 yards per carry with 11 touchdowns and was rated as the #39 running back in the nation by Rivals.com. He was also rated as the #23 cornerback in the nation by Tom Lemming. Additionally, he was named team offensive MVP, DeSoto County Offensive Player-of-the-Year by Port Charlotte Sun, and he was named to the All-Dixie team by SuperPrep.

Clemons not only excelled on the football field, but he showed superb athleticism on the track as well. He ran a 10.52 in the 100m, which was the fourth-best time in the state that year. He was a district champion in the 100m and 200m during his senior year, and he qualified for the state meet in both events. He was also the AAA region champion in the 100m. Clemons not only earned MVP honors in football, but he was named team MVP of the track team during his junior and senior seasons.

“Track helped with the speed I needed for college football,” explained Clemons. “I credit my track experience to my speed and agility on the football field.”

After a successful high school career, Clemons knew he had to make the transition to the college level. He was recruited by Clemson, Michigan State, Pittsburgh, and South Carolina. After going on official visits, Clemons new that Clemson would be the best place where he could succeed and grow on and off the gridiron. Clemson provided the atmosphere that he was looking for.

“Although I come from Florida, I was never really interested in attending a school there,” stated Clemons. “I liked the small-town atmosphere of Clemson, because I can focus solely on football and my academics without the distractions that can come from living in or close to a big city.

“When I came to visit Clemson for the first time, I fell in love with the support of the football team from the fans. There is no other place like Death Valley on Saturday. The tradition of the program along with the great fan base sold me on attending Clemson.”

The transition from high school to college is met with a lot of new experiences on the gridiron. Clemons came to Tigertown as a running back and cornerback. However, he soon found his niche when he was offered the chance to play safety.

“I hoped to play some offense in college, but I knew the best way to play right away would be with the defense,” said #22.

As a freshman on Clemson’s campus, Clemons embraced his new college lifestyle, juggling academics and athletics. He had been at Clemson no longer than a month when Hurricane Charley struck his hometown of Arcadia. At the time, Hurricane Charley was one of the most powerful hurricanes to strike the United States. Clemons, who was a 10-hour drive away from its landfall, could only watch on the television to see what was happening to his hometown.

He watched from afar as buildings were collapsing and flooding damaged the place he called home. His house was damaged by a palm tree that went through his roof, creating a large hole. He then offered to miss fall practice to come home and assist in the rebuilding of his town. However, his mother, Lillie Gulledge, would not allow that.

“I wanted to help out so much,” said Clemons. “I knew that my family and other friends in Arcadia had no water for days and no electricity for weeks. My mom didn’t want to subject me to that, so she told me to stay and focus on school and football. The hurricane made me realize that bad things can occur at any time, but I also know that bad experiences can strengthen people and bring them together.”

After red-shirting his freshman year, he went back to his hometown to see first-hand how bad the damage was. When he arrived three months after the hurricane struck, he found homes destroyed and some deserted. He also saw remains of trees strewn across yards.

“At first, everything shocked me,” admitted Clemons. “I looked at the places where I played as a child and the familiarity was gone. It was like a different town.”

Clemons wanted to help from the day the hurricane came through Arcadia, and he was now able to get his chance. Along with his cousin, Clemons fixed the roof of his home and did some other repair work on the house. He also helped remove the fallen trees from his yard. He had a positive attitude throughout, and the residents of Arcadia looked up to him and thanked him for helping out in a time of need.

After red-shirting in 2004, he came into the 2005 season better conditioned and mentally prepared to make his mark. He played all 12 games, averaging 13.6 snaps per contest. Clemons was one of only two freshmen to record at least one tackle in every game. He was third among freshmen in tackles with 33 and second on the team in special teams tackles (10). He added four stops each in games against #16 Florida State, #13 Miami (FL), Maryland, and Temple.

His first season proved to be very productive, as he earned first-hand experience playing against some of the nation’s most talented programs.

“My first season was eye-opening,” said Clemons. “I had the opportunity to learn the ropes throughout the season. I wanted to get as much early experience as possible that season, because I knew that I needed experience and off-season conditioning to have an opportunity to start the following year.”

As a sophomore free safety in 2006, Clemons had 102 tackles, second-most on the team. He led the secondary in tackles and led the team in passes defended (9). He also had 41 tackles in the last three regular-season games, including a career-high 17 against N.C. State.

His performance against the Wolfpack tied for the most tackles in a game by a Tiger all season. He also was awarded team defensive player-of-the-game honors against Maryland thanks to amassing 12 tackles.

Clemons added an interception against North Carolina and was also a big contributor in the Tigers’ win over eventual ACC Champion Wake Forest when he had 12 tackles. He was among the top-12 tacklers in the ACC and proved to be a force to reckon with.

As a junior in 2007, Clemons was the third-leading tackler on a top-10 team in terms of total defense, pass defense, and scoring defense. He played 821 snaps and totaled 94 tackles, third-most on the team. He had four double-figure tackle games, including a season-high 15 stops against #21 Auburn in the Chick-fil-A Bowl.

In 2007, he also had two interceptions, one against Furman and one at N.C. State. He won the coaches defensive player-of-the-game award when he had seven tackles, an interception, tackle for loss, and pass breakup against Furman.

After having two excellent seasons, Clemons is ready to become even more of a threat to opponent offenses in 2008. He enters today’s game with 255 career tackles, more than any other active Tiger and among the top figures by an ACC player.

He is coming off a performance in which he had his most memorable play, a 32-yard interception return for a score against S.C. State on September 20. It was his first touchdown as a Tiger.

In has been a special time for Clemons in the secondary, as he starts alongside fellow safety Michael Hamlin. The duo is in its third year together as Clemson’s last line of defense.

“We’ve grown as teammates and as friends,” stated Hamlin. “`C.C.’ and I are ready to finally win an ACC Championship and we’re determined to play our best, no matter what.”

The road to Tampa is the first of many goals for Clemons. He has already completed his degree in community recreation management. After this season, he plans to attend the NFL Combine in hopes of being drafted next spring.

“I would love to be drafted by an NFL team,” said Clemons. “However, if that does not work out, I want to coach football.”

After the completion of this season, Clemons will be remembered for his reliable pass coverage, tackling ability, nose for the football, and speed in the secondary. He, along with Hamlin, plans to put in the time and motivate younger teammates to achieve the goal of winning an ACC title.

Clemons is looking forward to the rest of the season, because he believes good things are in sight and knows that the Tigers are in contention to play for the ACC Championship in December.

Brittney Earle, a junior from Easley, SC, is a student assistant in the Clemson Sports Information Office.