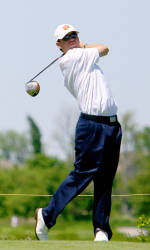 Clemson, SC — Senior David May fired a four-under par 68 in the opening round of the Puerto Rico Classic at Rio Grande, Puerto Rico to lead Clemson to a 285 team score. Ben Martin was also under par, helping the Tigers to a third place standing after the first round. The event is being played on the par 72 Rio Mar Country Club Course.

It was the first team round of the spring season for the sixth-ranked Tigers. NC State leads the way at seven-under par 281, four shots ahead of the Tigers. Clemson is tied with second ranked Oklahoma State at 285.

Head Coach Larry Penley is using a veteran lineup this weekend as the team is composed of the five players who took the Tigers to a number-five finish at last year’s NCAA national tournament at Purdue. This is the first time this year he has used this lineup of two seniors and three juniors.

May, who began his day at the 16th hole in the Shotgun start format, had birdies on the 11th and 12th holes to highlight his season best round. On the 11th hole he hit his drive on top of an ant hill, so he was given a free drop. He then hit his second shot on the green and made he putt. On the 12th hole he hit his second shot out of a hazard, then made a birdie putt from off the green.

Martin had a one under par 71 in the first round to give the Tigers two players under par on the first day. It was the second under par round of the year for the native of Greenwood, SC. He made a strong comeback after playing the first four holes at three over par.

All-American Kyle Stanley finished strong in recording his eight round at par or better this year. The native of Gig Harbor, WA who has already won medalist honors at the Carpet Classic, made birdies on four of his last five holes to give him momentum entering Saturday’s second round.

Sam Saunders had an opening round 74 and Phillip Mollica fired a 77.