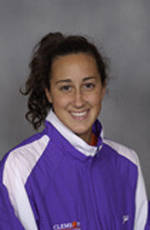 Chapel Hill, NC- The Clemson Swimming and Diving teams concluded the first half of their season as they swam in the final day of the Nike Cup, Saturday. Both teams remained in third place overall, with Florida State taking the title on the men’s and women’s side. Clemson lit up Koury Natatorium in Chapel Hill on their way to three swims that cracked the school’s all-time top 10 list. Cassy LaRussa improved her career best time in the 1650 freestyle to move from seventh to sixth, Katrina Obas swam into ninth place in the 200 breaststroke, and Thomas Recko moved into eighth place in the 200 backstroke.

The Lady Tigers started off the Saturday night session in grand style as Cassy LaRussa picked up her second victory of the meet. LaRussa swam a career best time of 16:35.63, which was an NCAA Provisional Qualifying time. LaRussa’s time was also good enough to move her up to sixth place on Clemson’s all-time list in the event. Mandy Snell (17:07.60) and Summer O’Donnell (17:17.54) placed 10th and 15th, respectively. Michelle Parkhurst (2:00.57) followed the distance girls by finishing the 200 backstroke in second place. Cassy LaRussa closed out the meet with a fourth place finish.

Clemson will next be in action as coach Leslie Hasselbach will take the Tiger divers will go to Athens, GA for the Georgia Diving Invitational on January 2-4. The swimmers will start the 2007 portion of their season in Boca Raton, FL as they take on Florida Atlantic on January 3.