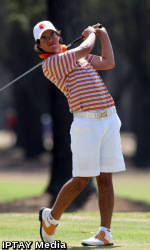 CLEMSON, SC – Freshmen Hayden Garrett and Billy Kennerly fired two-under par rounds of 70 on Tuesday to lead Clemson to a sixth-place finish in a field of 15 teams at the Woodlands All-American Intercollegiate. The two-day 54-hole tournament was played at The Woodlands Country Club in Houston, TX.

This was Clemson’s final tournament until the ACC Tournament April 20-22 at The Old North State Club in New London, NC. It was also Clemson’s last tournament without number-one player Corbin Mills, who will play in the RBC Heritage on the PGA Tour starting Thursday. Mills also missed the Augusta State Invitational while playing in the Masters last week.

Garrett tied his season best with a final round 70 on Tuesday. He finished in 51st place with a 221 total. He started his Tuesday round in fine fashion with birdies on the first two holes and birdies on 10 and 12. He was at four under par playing the last hole, but finished with a double bogey on 18.

Kennerly tied for Clemson’s best golfer for the tournament with a 215 total, one under par and good enough for a 20th place finish. His final round 70 included a four-under-par performance over the last 12 holes, including birdies on the 12th, 14th and 15th holes. Kennerly played the par four holes in three-under-par for the tournament, second best in the field, and he had 37 pars, tied for seventh best among the 81 players.

Crawford Reeves tied Kennerly for 20th place and Clemson honors for the tournament, but he had his worst round of the spring on Tuesday with a 74. He had rounds of 71 and 70 during Monday’s 36-hole marathon. He actually made a strong comeback on Tuesday. After shooting four-over-par 40 on the front, he made birdies at 11 and 12, then made an eagle on the par five 13th to get to even par. But, he made bogeys on 16 and 18 to close two over. For the week, he was even par on the par three holes, best among Tiger golfers.

Thomas Bradshaw finished 25th in the field with a 217 score. He had rounds of 73-70-74. Double bogeys on the third and 17th holes ruined his round, but he finished the tournament with 12 birdies, most among Clemson players.

McCuen Elmore finished with a 223 total for his 54 holes after rounds of 73-73-77. He had 11 birdies to rank second among Clemson golfers and played the par five holes at seven under par, tied for fifth in the field.