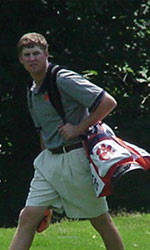 Rio Mar, Puerto Rico – D.J. Trahan fired a final round 69 and Ben Duncan added a 70 to lead Clemson to a second-place finish at the Puerto Rico Classic at Rio Mar Country Club in San Juan, Puerto Rico. Clemson finished the three-day, 54-hole event on the par 72 course with an 854 score, 10-under par.

Clemson trailed only #1 ranked Georgia Tech, who ran away from the field with an 829 total, an incredible 35-under-par. Clemson was three strokes better than Purdue, who had an 857 score, while defending national champion Florida was fourth at 869.

Trahan shot a 69 on Tuesday, giving the Clemson junior three straight under-par rounds. He has now scored under par in 15 of his 21 rounds this year and has 20 consecutive rounds of 72 or better. He finished at 211, and the fourth place finish was his sixth straight top five, a first in Clemson history. He now has a 69.86 stroke average for the academic year.

Jones tied Trahan for fourth place, his highest finish as a Tiger. His previous best was a ninth-place at this year’s Ping Preview, an event Clemson won as a team. Jones had rounds of 69-69-73 in recording his 211 total.

Troy Matteson won the tournament with a 205 after a 71 on Tuesday, while Lee Williamson of Purdue was second at 207. Nicholas Thompson of Georgia Tech had three consecutive rounds of 70 to finish at 210, one shot better than Trahan.

Clemson will next be in action March 8-10 at the Las Vegas Invitational.