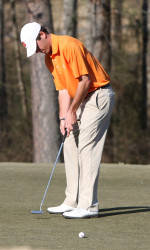 Alpharetta, GA – Ben Martin fired a one-under-par 69 on Saturday to lead the Clemson golf team to a second-place finish out of 13 teams at the NCAA Southeast Regional at the Capital City Grabapple Course in Alpharetta, GA. The Tigers now advance to the NCAA Championship Tournament at The Honors Course in Chattanooga, TN June 1-5.

The top five teams from the Southeast Regional advanced to the national tournament. Oklahoma State finished first with a score of 841, while the Tigers were second at 843. The two-stroke margin was the same margin Clemson defeated Oklahoma State by seven years ago at the NCAA Championships at Oklahoma State’s home course.

Georgia Tech finished third at 845, while Arizona State and Georgia Southern tied for fourth and will advance to the NCAA National Tournament at Chattanooga,TN. This marks the 26th time in the last 29 years that Clemson has made the NCAA National tournament the 24th time in the 27 years Larry Penley has been the Clemson head coach. Saturday’s strong finish erased the disappointment of last year when Clemson was the number-one seed at the East Regional in Galloway, NJ, but finished ninth at the regional and missed the national tournament.

“We set our minds to come back strong after we were disappointed at the ACC Tournament. Finishing just two shots back of the number-one ranked team in the nation (Oklahoma State) shows that we can play with anyone and it will give us confidence at the nationals.”

Martin had consistent rounds of 71-69-69 in finishing with a one under par score of 209 for the 54 holes. He finished third individually, his top finish at an NCAA Tournament in his four years with the Clemson program. Saturday he had a consistent round with birdies on the fifth and 14th holes and just one bogey. He had a pair of clutch up-and-downs on the 16th and 17th holes to keep Clemson ahead of Georgia Tech and in the race against the Cowboys. He had to make a 15-foot putt to save the par at 16.

Corbin Mills had his second even-par round of the tournament and was Clemson’s second best golfer on Saturday. He had a 78 in the second round when his driver was errant, but he was consistent all day on Saturday. He had 16 pars, one birdie and one bogey. “The big difference for me was driving the ball in the fairway and getting on the green in regulation. I only missed two greens all day and I was able to lag putt very well.

Jacob Burger was Clemson’s third best golfer on Saturday with a one over par round of 71. He finished 16th at the tournament with a 213 score after rounds of 74-68-71. He finished his round strong with a birdie on the 18th hole, a birdie that kept Clemson ahead of Georgia Tech in the fight for second. He hit a five-iron to within one foot from 204 yards on his approach to the 18th hole. He also had birdies on the first and 13th holes.

Luke Hopkins both had rounds of two-over-par 72 on Saturday, giving Clemson consistent play from all five golfers. Reeves was Clemson’s second best golfer for the tournament with a 212 score and he finished in 13th place. Hopkins finished with a 215 score for the three days, good enough for 23rd place.

While Head Coach Larry Penley was hoping for an eighth regional championship for the Clemson program, he was pleased with the team’s performance. “We had a solid day and tournament,” said Penley. “We couldn’t seem to make the birdies early like Oklahoma State and Georgia Tech did, but we were making pars and continued to stay away from big scores. We didn’t count a double bogey all week and had just one total.

“The key to us for the week was our lag putting. It might have been the best I have seen from a Clemson team. We were not comfortable with the greens at The Old North State Club (ACC Tournament site), but we got the feel of them during the practice round here and that was very important.

“I am very proud of this team. Overall it has made great progress over the course of the season and we should go to the Honors Course with confidence. We played just about even with the number-one team in the nation over three days.”