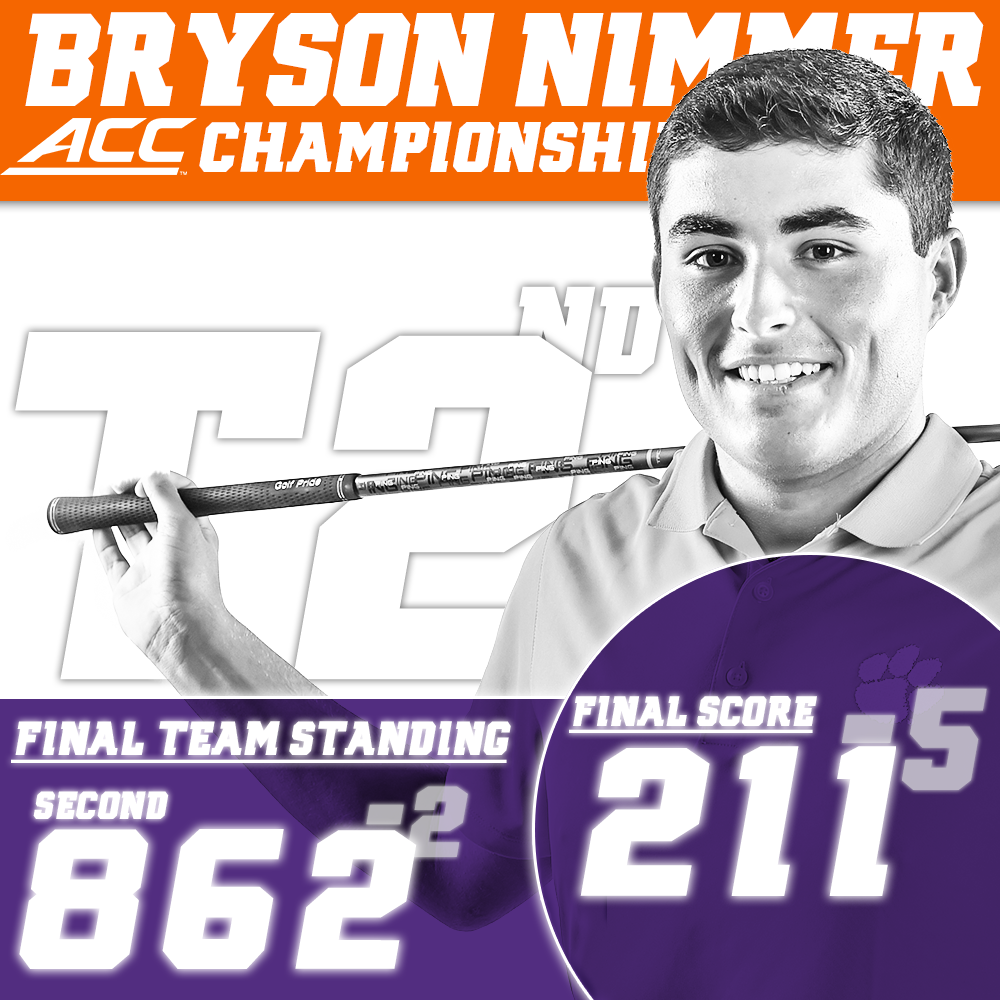 Clemson, S.—Bryson Nimmer finished tied for first place after regulation play and William Nottingham finished in a tie for 10th to lead Clemson to a second-place team finish at the 2017 ACC Men’s Golf Championship at Musgrove Mill Golf Course in Clinton, S.C.  The 12 teams played 36 holes on Saturday to complete the 54 hole tournament a day early.  A threatening weather forecast for Sunday in the upstate of South Carolina forced league officials to finish the tournament on Saturday.

Duke won the team championship with an 850 team score, 12 shots ahead of the defending champion Tigers.  Clemson’s 862 team score on the par 72 course was five shots ahead of ninth ranked and third-place Wake Forest.   Florida State was fourth at 868 and NC State finished fifth at 873.

Jimmy Stanger of Virginia won the tournament in a one-hole playoff against three opponents with a 10-foot birdie putt.  Nimmer, Stanger, Ben Griffin of North Carolina and Paul McBride of Wake Forest all finished the 54-hole regulation play at five-under par 211.   But Stanger was the only player to make a birdie on the first playoff hole, the 18th hole on the course.

Nimmer finished fourth at the 2016 ACC Tournament and is the first Clemson golfer with consecutive top four finishes at the conference tournament since Jack Ferguson had three in a row from 2003-05.   Nimmer finished with a Clemson team best 12 birdies.  He had a first round 66, which tied for the best by a Clemson golfer in the first round of the ACC Tournament, then had rounds of 73 and 72 on Saturday.

Nottingham, a freshman from Kingsport, Tenn, finished tied for 10th after scoring consecutive rounds of 71 on Saturday.  It was his second straight top 10 finish, as he finished fourth at the Wolfpack Spring Open last week, a performance than included a school record 62.

Senior Carson Young saw his streak of top four finishes end at four with a 15th place finish at the ACC Tournament.  Young had rounds of 69-75-73 to finish with a 217 total for the 54 holes.    Freshman Doc Redman saw his streak of consecutive top 10 finishes end at six in a row, the most ever by a Clemson freshman, but the native of Raleigh still finished 18th with a 219 score.

While Clemson did not win the tournament, it did mark the third straight year that Clemson finished either first or second, a first for the Clemson program.  Clemson lost to Georgia Tech in a playoff in 2015, then won the event last year.

The key to this tournament was par five scoring.  Clemson played the par five holes at six under par for the weekend, while Duke was 26-under on the par fives.

Clemson now awaits its NCAA regional bid, which will be played May 15-17 at a site to be announced.