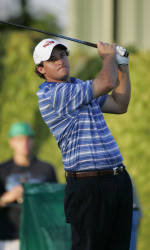 West Lafayette, Ind. — Sam Saunders shot a two over par 74 on Saturday to lead Clemson to a fifth place team finish at the 111th NCAA Men’s Golf Championships at the par 72 Kampen Course at Purdue University in West Lafayette, IN. Clemson finished with a score of 49 over par 1201, just seven shots behind National Champion UCLA.

UCLA finished first at 42 over par, followed by Stanford at 43 over par and Southern California at 44 over. Oklahoma State was fourth at 48 over par, just one shot ahead of Clemson. Clemson was the highest finisher among ACC and SEC schools with its fifth place finish. Wake Forest (22nd) and Virginia (26th) were the only other ACC teams in the field.

Clemson had its highest team score of the tournament on Saturday with a 22 over par 310. But, the windy conditions were the most difficult of the four day, 72-hole tournament. The average score for the field on Saturday was 78.2.

Clemson’s fifth place finish was its best at the NCAA National Tournament since 2003 when it won the National Championship at the Karsten Creek Course at Oklahoma State University. It was the program’s ninth top five finish in history, its eighth under current head coach Larry Penley.

Penley celebrated his 25th season at Clemson this year. He is now second in Clemson history in top five finishes among all coaches in all sports, trailing only former soccer coach Dr. I.M. Ibrahim.

Clemson’s fifth place national finish was the best by a Clemson athletic program so far this year. The men’s and women’s track teams will compete at the NCAA National meet in two weeks to conclude the athletics year. Seven Clemson programs have finished the year in the top 25: Football, men’s basketball, men’s indoor track, volleyball, women’s tennis, golf and rowing.

Clemson entered the final round tied for second place, just three shots behind UCLA. The Tigers shot nine over par as a team on the front side, then struggled early on the back side. At one point Clemson was 39 over par and trailed UCLA by 15 shots. But, the Tigers started to make some pars and Sam Saunders made a birdie on the 13th hole. When David May scored a birdie on the 16th hole, the Tigers trailed by just five shots.

But, behind those two players, Clemson counted a pair of double bogeys and Clemson’s hopes winning a second national championship were dashed.

“It was a difficult day for everyone in the field, but we just didn’t play well,” said Penley. “But, at the same time I am proud of what this team accomplished this week.” Clemson was ranked 14th and 15th in the two college golf polls entering this week, but finished fifth in the national tournament.

“It was a tough day, but the guys hung in there. They battled. But, you just can’t let your guard down for one skinny second on this course. If you do you will make a bogey. If you let your guard down for 10 minutes it is a double bogey. Every shot is a premium. The only course I can think of that compares to this is Hazeltine (in Minnesota, site of the 1999 NCAA Tournament.)

“I am proud of the 74 that Sam Saunders turned in today and the 75 by David May. Those were outstanding performances. If you would have told me we could have shot 14 over par today and we would have won, I would have said hand me the trophy. But it was just a difficult scoring day.”

No team in the 15 team field on Saturday shot better than 302.

Clemson’s team made just six birdies on Saturday and Saunders had three of them. After a slow start with bogeys on the first two holes, the Clemson sophomore played the rest of the round at even par. He made a birdie on the 600-yard par five sixth hole when he hit his third shot a foot from the pin. Then, on the eighth hole he rammed in a 20 foot putt with the bravado of his grandfather, Arnold Palmer. He also made a birdie on the 13th hole and had a terrific par save on 16 when he was in two different sand traps.

May had just one birdie, but had just four bogeys and 13 pars. His birdie came on the par five 16th hole when he hit his third shot within six feet. He then made a brilliant up and down for par on the 17th hole before making a bogey on the long par four 18th.

Kyle Stanley was Clemson’s top golfer for the tournament with a 295 total, good enough for seventh place. But the Clemson All-American struggled to a 10 over par 82 on Saturday, tied for his high round as a Clemson golfer. It was his first round over 75 in NCAA Tournament play.

Still, he now has consecutive top 10 finishes at the NCAA Tournament, the first Tiger to do that since D.J. Trahan in 2001 and 2002.

Ben Martin was Clemson’s second best golfer for the tournament with a 304 score, good enough for 29th. He shot a seven over par 79 on Saturday.

Saunders and May both finished at 306, good enough for 38th place.

Phillip Mollica shot an 84 on Saturday, including an 11 on the par four 12th hole. He hit two balls into deep rough that could not be found, leading to the high score. He was just three over par through the first three holes.