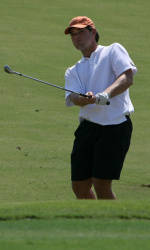 CLEMSON, SC – Corbin Mills fired a four-under-par 68 and McCuen Elmore recorded a top 10 finish with a third straight round of par of better, leading Clemson to a fifth-place finish at the Carpet Classic in Dalton, GA.

The 12-team tournament was won by Auburn with a score of 13-under-par 851, while Tennessee was second at 856. Georgia Tech was third at seven-under par 857, while Alabama was fourth at 862, just one shot ahead of Clemson. Clemson was nine shots better than 15th ranked Georgia and 10 better than ninth-ranked LSU. Clemson also finished 24 shots better than ACC rival Wake Forest and 27 shots better than state rival South Carolina.

The Tournament featured six of the top 20 teams in the nation. Clemson was ranked 16th in the nation entering the tournament. Tennessee was the only team ranked below Clemson to finish higher than the Tigers.

Mills had a 68 on Sunday thanks to an eagle on a par four hole, four birdies and two bogeys. He was six under par for his first 12 holes. His 68 was his best in the last two years for Clemson. He finished 11th in the individual race.

Clemson’s third best player on Sunday was sophomore Thomas Bradshaw, who fired a one over par 73. His round was highlighted by a birdie on the par three 11th hole and an eagle on the par five 12th hole.

Senior Jacob Burger was Clemson’s third best player for the tournament and had a final round 76, but still had a top 20 (19th) finish a total of 217. Freshman Billy Kennerly had an 80 on Sunday, but his second round 70 was one of the highlights of the tournament for the Tigers.