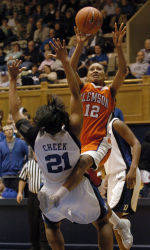 Clemson Falls To NC State, 65-52, In Raleigh On Thursday Night

RALEIGH, NC – Tasha Taylor scored a team-high 14 points and Lele Hardy recorded her third double-double of the season, but the Lady Tigers suffered a 65-52 loss to NC State at Reynolds Coliseum in Raleigh, NC on Thursday night.

The loss dropped Clemson to 10-14 overall with a 2-7 mark against ACC competition, while the Wolfpack improved to 18-7 on the year and 7-3 in conference play.

Hardy was 9-for-11 from the foul line for 13 points and she tied with Moreemi Davis for high-rebounding honors with 10, which matched a career high for Davis.

Keisha Brown led NC State with 15 points while Khadijah Whittington turned in a double-double performance with 12 points and 18 rebounds.

The Lady Tigers closed out the first half on an 8-2 run, thanks in large part to three-pointers by Carrie Whitehurst and Morganne Campbell, and held a 32-27 advantage at the break.

After trailing the Wolfpack, 15-7, at the 13:07 mark, Clemson outscored NC State by an 11-3 margin in the next four minutes to tie the game at 18 apiece. The lead then changed hands five times before a Hardy bucket with 3:30 remaining put the Lady Tigers on top for the remainder of the half. Whitehurst hit a deep three to widen the gap to four at 29-25 and Campbell’s three from the corner gave Clemson a seven-point advantage. The Pack’s Chanita Jordan scored the final points of the half to put her team within five.

However, NC State opened the second half on a 9-0 run to take a two-point lead just 2:35 minutes into the period. D’Lesha Lloyd ended the Lady Tiger drought with back-to-back jumpers, but the Wolfpack regained the lead, 37-36. The score remained tight until an 8-1 NC State run that widened the gap to nine points with 6:20 remaining.

Clemson cut it to three at 53-50 after Hardy completed a three-point play at the 4:30 mark. The Lady Tigers scored their final points of the night on two foul shots by Hardy with 2:46 remaining as NC State converted its own free throws down the stretch and held on the for the win.

Clemson will return to Littlejohn Coliseum on Sunday afternoon, as the Lady Tigers will play host to Virginia Tech. Tip-off is slated for 2:00 pm.