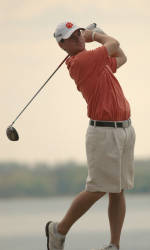 Clemson, SC — David May shot a two over par 74 to lead Clemson in the second round of the Puerto Rico Classic on Saturday. The Tigers shot a 302 round as a team on Saturday, 18 shots worse than their 284 score on Friday that tied for first place. The Tigers are in eighth place in the 15-team field entering Sunday’s final round. The 54-hole event concludes at Rio Mar Golf Club near San Juan, Puerto Rico on Sunday.

Alabama has the team lead after two rounds at 574, while Oklahoma State is second at 576. Duke shot a 285 on Saturday to tie for the best team round and jumped to third place at 577. Michigan is fourth at 578. Georgia, ranked number-one in the nation entering the event, is fifth at 580. East Tennessee State is sixth at 581 and Georgia Tech is seventh at 584. The Tigers are two shots behind Georgia Tech and 12 shots out of first place.

May has been the most consistent Clemson player with rounds of 75 and 74. He had the worst score among Clemson players on Friday, then had the best round on the second day. May is tied for 36th individually after two rounds.