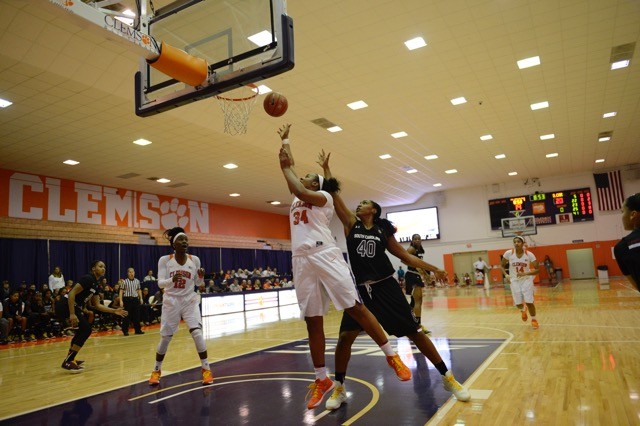 CLEMSON, S.C.- Clemson (1-2) fell to #2/2 South Carolina by a final score of 67-41 in front of a packed house in Jervey Gym on Wednesday night. Sophomore Justice Wright led the Tigers with a career-high 13 points and five rebounds. Victoria Cardaci added nine points for Clemson.

“I’m really proud of Justice Wright. I’m not sure what she ate or what she did, but we need her to do that every game. She did a good job of doing what we’ve been telling her to do,” Coach Audra Smith said.

The Gamecocks got off to quick start, taking an 18-4 lead with 1:53 left in the first quarter. However, Clemson would not go away and managed to cut the lead to just six points (25-19) with 3:09 to play in the first half on two free throws from Danielle Edwards. South Carolina finished the second quarter on a 5-0 run to take a 31-20 lead into intermission.

The Gamecocks began the third quarter on 19-5 run and Clemson struggled to counter the offensive outburst. The Tigers managed to outscore South Carolina 13-9 in the fourth quarter but could not get out of their own way as Clemson committed 19 turnovers in the contest to South Carolina’s five.

“I’m proud of my team’s effort tonight. We just have to take this as a learning experience and take the positives from it and move on. I’m proud of the way we fought tonight.”

Tonight’s contest was a “Pediatric Cancer Awareness” game as fans were asked to pledge a certain amount of money for each free throw the Tigers made. At time of press, $975 had been raised to help fight Nueroblastoma, a disease that has personally affected Clemson Director of Operations Kathy Becker’s son Colt.

“I told the players before we came out that we have to think about the big picture, and at the end of the day, we are family. The entire Clemson athletic department and the entire Clemson community is family. So for us to have an opportunity to come out and do something special for Colt is big. And that’s what we’re all about.”