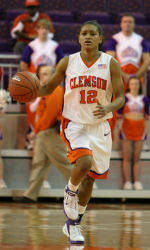 ATLANTA, GA – Tasha Taylor scored a game-high 17 points for Clemson, but the Lady Tigers were edged by Georgia Tech on Monday night at the Alexander Memorial Coliseum in Atlanta, GA. The Yellow Jackets converted 8-of-10 free throws in the final four minutes of the game, while holding Clemson to just four points during the stretch to post their 17th victory of the season.

“Our inexperience and youth really hurt us in the end,” Lady Tiger Head Coach Cristy McKinney said. “We rebounded well in the last few minutes but couldn’t get over the hump.”

Georgia Tech is now 17-10 overall and 8-5 in ACC contests. The loss dropped Clemson to 12-15 on the year with a 4-8 ledger against conference foes.

In addition to her 17 points, Taylor handed out five assists with two steals in the effort. Freshman Lele Hardy also posted double-figures with 10 points on the night, while also leading the Lady Tigers on the boards with eight.

A close first half of scoring saw the two teams end the half as they began, knotted at 27 apiece. The Yellow Jackets struck first and held a five-point advantage as Nnamaka drained a three pointer at the 11:27 mark. The Lady Tigers took their first lead of the game at 22-20 after Moreemi Davis converted a basket in the paint with 4:14 left.

Georgia Tech regained a three-point advantage with just over one minute remaining in the period before Taylor hit a three from the top of the key to match the Yellow Jackets’ 25 points. Taylor then stole the inbounds pass and dished the ball to Hardy for a short jumper to put Clemson ahead by two. However, Kentrina Wilson tied the score at 27-27 on Georgia Tech’s next possession and the teams headed to the lockerrooms.

The Yellow Jackets opened the second half on an 8-2 run to take the 35-29 lead, but the Lady Tigers fought their way back into the game and took the lead at 46-45 with 9:14 remaining.

Georgia Tech was up by three at 60-57 with 18 seconds left, and after timeouts by both teams, Hardy made a field goal underneath the basket with 7.9 on the clock. The Lady Tigers then send Nnamaka to the line with six seconds remaining, where she drained both. Taylor’s final attempt fell short and the Yellow Jackets recorded the victory.

The Lady Tigers will be back in action on Thursday night as they will travel to Tallahassee, FL to take on the Florida State Seminoles. Game time is slated for 7:00 pm.