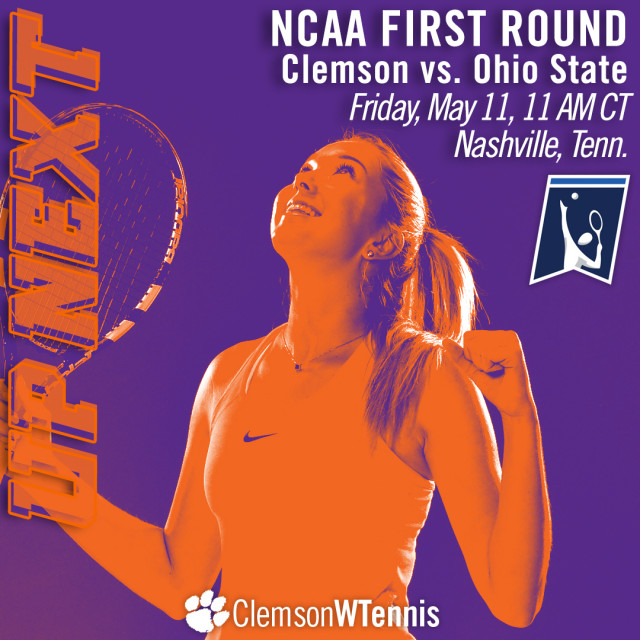 -The Tigers (13-13) have had two weeks off since their last competition, a close 4-2 loss to No. 38 NC State in the second round of the 2018 ACC Championships in Cary, N.C. Senior Marie-Alexandre Leduc and junior Ally Miller-Krasilnikov won their matches at No. 1 and No. 6 singles, respectively, over the Wolfpack.

-Clemson won five of its last eight regular season matches, which included victories over No. 46 NC State, Notre Dame, Pittsburgh and Louisville, as well as a 4-3 upset over 22nd-ranked Virginia on the road in Charlottesville.

-Daniela Ruiz, the Tigers’ lone senior and a three-time team captain, has clinched the victory in the team’s last three wins, doing so on the road at Pittsburgh on April 6, at home against Louisville on April 13 and the upset at Virginia. The match against Louisville was Ruiz’s Senior Day, and she ended up clinching the win in a third-set tiebreak.

-Ruiz officially became a Clemson graduate this morning, Thursday, May 10, but as her classmates in Industrial Engineering were walking across the stage on the Clemson campus, Ruiz and the Tigers were in Nashville, practicing for Friday’s NCAA First Round contest.

-Junior Marie-Alexandre Leduc is ranked 24th in the nation in singles according to the ITA poll released on May 3. Leduc has a 21-10 overall record and a 12-7 record in dual matches. She has played all 19 of her dual matches at No. 1 singles, and has nine wins over nationally-ranked opponents on the season.

-Leduc and fellow junior Fernanda Navarro are ranked 21st nationally in doubles. The pair is 19-8 overall and 11-5 in dual matches, all at No. 1 doubles, having defeated four nationally-ranked opponents.

-Navarro has more doubles wins than any other Tiger, with a 23-10 overall record and a 13-6 record in dual matches on the year.

-Leduc and Navarro were both named to the 2018 All-ACC Team, as Leduc earned first-team honors and Navarro was selected to the third team.

-Leduc received an invitation to play in the 2018 NCAA Singles Championships, and she and Navarro were invited to the NCAA Doubles Championships. The national individual championships will be held in Winston-Salem, N.C. on May 23-28.

-This is Clemson’s 17th consecutive appearance in the NCAA Championships. Only 14 other Division I women’s tennis programs have reached the tournament more consecutive seasons, with Stanford and UCLA leading the way with an impressive 37-straight NCAA berths. Four of the 14 schools ahead of the Tigers in this category are from the ACC (Duke 29, Miami 23, North Carolina 20, Georgia Tech 19).

-Head Coach Nancy Harris has led Clemson to NCAA Championship appearances in 19 of her 21 seasons at the help of the program. She has guided the Tigers to the NCAA Round of 16 or better 10 times in the last 14 years, including the program’s two best finishes of all time, Final Four appearances in 2004 and 2005. Harris is the only coach in the history of Clemson Athletics to lead a Clemson women’s program to an NCAA Final Four.

-Clemson has traveled to Nashville, Tenn. for three consecutive NCAA First & Second Rounds, from 2016-18. Last season, the Tigers upset No. 31 Washington 4-2 in the first round on May 12, before falling to regional-host and No. 3-ranked Vanderbilt 4-1 in the second round on May 13.