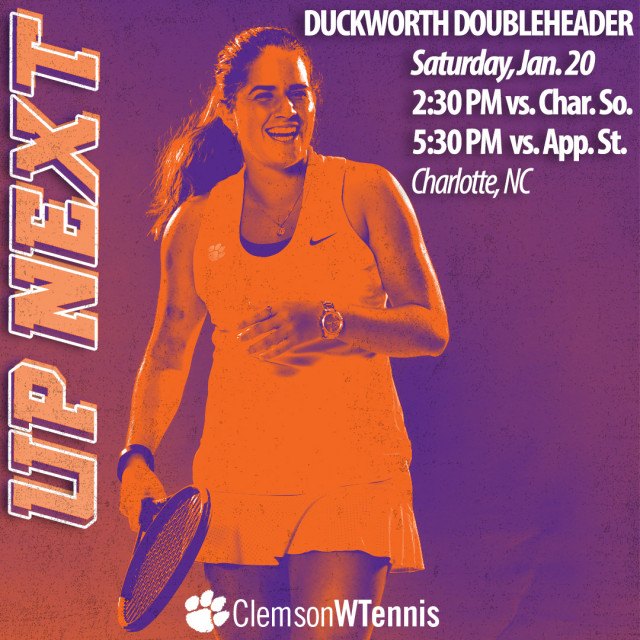 – Saturday’s matches are part of the Duckworth Doubleheader, an annual event named in honor of Ed and Jane Duckworth, dedicated friends and supporters of Clemson, Clemson Athletics and Clemson Tennis. Four teams, Clemson, along with Charleston Southern, Appalachian State and UNC Wilmington, will play two dual matches each on Saturday in Charlotte as part of the event.

– Daniela Ruiz (Beni, Bolivia) is the lone senior on the team, and is the Tigers’ team captain for the second-straight season.

– Ruiz was named an NSCA All-American Strength & Conditioning Athlete of the Year in 2017, and was a doubles specialist for the Tigers last spring, with an 18-3 record in dual matches and a 10-1 record in ACC play.

– Leduc had an impressive fall 2017 season, in which she was 9-3 in singles play and reached the quarterfinals of the Oracle ITA National Fall Championships and the semifinals of the ITA Carolinas Regional.

– Juniors Fernanda Navarro and Ally Miller-Krasilnikov and sophomores Constanza Gorchesand Sydney Riley, are also back for the Tigers in 2018.

– Tate Schroeder, a sophomore from Centennial, Colo. and transfer from Mizzou, and Laura Marti, a freshman from Madrid, Spain, are the team’s two newcomers.