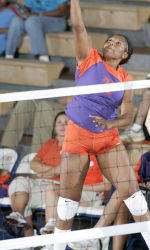 TALLAHASSEE, FL – The Clemson volleyball team pulled out a thrilling five-game victory over the Florida State Seminoles on Sunday afternoon. Jeannette Abbott led the Tigers with 23 kills and Florida natives Danielle Hepburn and Brittany Ross each contributed 14 kills in Clemson’s 3-2 win. The Tigers improved to 8-4 overall with a 3-1 conference record while the Seminoles fell to 3-9 overall and 1-3 in ACC play.

“It was a tough match against two very good teams with both going five games,” Head Coach Jolene Jordan Hoover said in reference to today’s match as well as Friday’s loss to Miami, “It was nice to get a win on the road.”

Clemson dropped the first game in the match by a score of 30-23 but rebounded with a 32-30 win in game two. The Tigers took their first lead in the game at 20-19 but the score went back-and-forth as both teams fought hard for the game. Florida State was ahead 29-28 when Sue Eckman served to put the Tigers up 30-29. The Seminoles then tied the game at 30-30 before Clemson claimed the victory on a kill by Laura Boozer.

Game three was much like the second as the score remained tight throughout the game. Clemson again prevailed, winning the match 30-28 on a kill by Abbott. Florida State took game four, 30-20, to force a fifth game. The Seminoles held the lead for much of the deciding game, but the Tigers fought hard and finally pulled ahead at 13-12. Clemson went on win, 15-13, for the victory.

The Tigers return home for two ACC match-ups next weekend as they host Boston College on Friday, Oct. 7 at 7:00 PM and Maryland on Saturday, Oct. 8 at 6:00 PM.