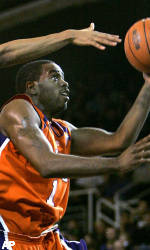 The Tigers (17-5, 5-3 Atlantic Coast Conference) took command quickly with sizzling shooting that lasted all game. They outscored Virginia 27-5 over a span of about 7 minutes in the first half, connecting on 10 of 13 shots overall and seven 3-pointers.

Rivers had three, Cliff Hammonds and Terrence Oglesby two 3s each in the run, which gave the Tigers a 36-14 lead. The Cavaliers never got closer than 14 as Clemson gained its biggest road victory in ACC play. They won at Florida State by 29 in 1998.

Virginia (11-10, 1-7) trailed by 16 at halftime and by as many as 38 thereafter. Co-champions with North Carolina in the ACC just a year ago, the Cavaliers lost their fifth straight, for the eighth time in nine games and matched their worst start in the league since the 2004-05 season. That’s also the last time they lost five in a row.

This one was over quickly, and as the Tigers pushed their lead above 30 in the second half, boos rained down at John Paul Jones Arena and fans began filing out.

Rivers scored 16 points in the first half and was 4-for-5 from 3-point range, and he wasn’t the only one making most everything. The Tigers were 8-for-14 on 3s for the half, then made 7 of their first 10 in the second half, a sizzling 62.5 percent.

Hammonds added 16 points, Oglesby 14 and David Potter 10 for the Tigers.

Adrian Joseph was the only Virginia player who kept them in the game during the first half. He scored 15 of their first 22 points and finished with 19. Sean Singletary scored 14, but had six with no assists and four turnovers in the opening 20 minutes.

The Cavaliers made only two field goals in a span of nearly first-half 13 minutes, and Joseph had both – a 3-pointer that made it 9-9 and a layup that made it 31-14.

Virginia trailed 40-24 at the break, and that was after closing the half with a 10-4 run. They had 14 turnovers, eight field goals and just two assists in the half.

The Cavaliers last year were getting drummed at Clemson and then shocked even coach Dave Leitao by scoring the last 15 points to win 64-63, but hope that they would begin another dramatic comeback was extinguished quickly following the intermission.

The Tigers opened the second half with a 10-5 run that featured bookend 3-pointers by Rivers and just kept pouring it on as fans that weren’t jeering filed out.