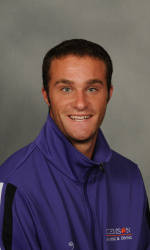 Clemson, Duke Split in Swimming and Diving on Senior Day

CLEMSON, SC – The Clemson men and women’s swimming and diving finished up the dual meet season at McHugh Natatorium with Clemson’s men winning 182-116 while Duke’s women took the win 158-142. Clemson’s men now improve to 6-4 overall and 1-4 in the ACC, while the women fall to 8-5 overall and 2-4 in the conference.

“This was a nice win for the men,” said Head Coach Christopher Ip. “It is always a good thing to finish the regular season on a win. I thought we had great leadership from our seniors today and the underclassmen were a great supporting class. This is the way we want to honor our seniors. On the women’s side, it was a great meet. These meets have been very close and we just have to win more races. We have been in the right position but just need to get more wins. This was another good meet and hopefully our women can get hungry by the ACC Championships. I also want to say congratulations to our seniors.”

The Tigers started the day strong by winning the 200 medley relay on both the men’s and women’s side. The women’s group of Kelli Kyle, Katrina Obas, Jason Chatlosh, Kyle Shoemaker, Seth Broster and Eric Bruck won in a time of 1:32.00.

The men also finished strong in the 1000 free as they took first and second with sophomore Alex Carr taking the win with a 9:30.77 and fellow sophomore Will Clark coming in second.

Freshman Joanna Rakoczy and Rachel Hesler taking third and fourth for the women. On the men’s side, sophomore David Gordon who took second with a 1:41.38.

The women got another win with sophomore Kelli Kyle finishing first in the 100 back. Then Seniors Jason Chatlosh made it a one-two finish on the men’s side. Recko also had a win in the 200 back to finish out the regular season strong and freshman Sarah Andrews won for the women.

Sophomore Katrina Obas took second on the women’s side. Senior Matt Angelini then had a second place finish in the 200 fly for the men with a time of 1:54.16.

In the 100 free, David Gordon and Chris Dart then had a one-two finish for the Tigers in the 500 free.

The 400 IM was a strong event for the Tigers, as freshman Tori Cervone took first for the women and Matt Anglini, Alex Carr and Andrew Abeysinghe finished first, second and third respectively for the men. The Tigers then took first in the 400 free relay on both the men’s and women’s side.

The Tigers will now prepare for the ACC Championships that will take place in Chapel Hill, NC. The women and all of the divers will compete on February 17-20, while the men’s meet will take place February 24-27.