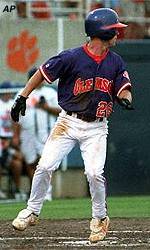 CLEMSON, S.C. – The fifth-ranked Clemson baseball team lost its home opener for just the second time since 1986 when it fell to Richmond 10-5 on Friday at Doug Kingsmore Stadium.

First baseman Vito Chiaravalloti and right fielder Ryan Martin each had two hits and two RBIs to lead the Spider offense while starting pitcher Mike McGirr gave up three runs in six innings as Richmond earned its first victory of the season.

Clemson starter Jarrod Schmidt gave up three runs, only one of which was earned, in four innings to get the loss. Right fielder Kyle Frank went 3-4 with one RBI and right fielder Casey Stone went 2-3 with one RBI to lead the offense. The Tiger defense suffered from two wild pitches and five errors, the most errors committed since April 24, 1999 against Georgia Tech.

Richmond grabbed the lead in the first inning. After leadoff batter Bryan Pritz singled and advanced to second base on a fielder’s choice, Chiaravalloti hit a ground ball that slid underneath the glove of Clemson shortstop Jeff Baker and allowed Pritz to score. Singles by left fielder Manny Cicchiello and designated hitter Adam Tidball loaded the bases for John Nathans, who drove in two runs to make the lead 3-0.

Richmond added to its margin in the fifth on Clemson reliever Matt Henrie. Singles by Chiaravalloti and Pritz followed by a Tidball walk once again loaded the bases. Martin hit a dribbler down the line that scored a run when Tiger third baseman Khalil Greene could not field it cleanly. The bases were cleared two batters later when another dribbler down the third base line was fielded by Henrie but thrown over the head of first baseman Michael Johnson. The four-run inning gave the Spiders a commanding 7-0 lead.

Clemson finally got on the board in the bottom of the inning. Frank hit a double to left field and scored two batters later off a Casey Stone with a sacrifice fly and Greene scored on a Frank single to right field.

Martin responded in the top of the seventh with a blast over the left field fence to give Richmond an 8-3 lead. Reliever Tim Stauffer entered the game in the bottom of the inning and gave up a sacrifice fly to Casey Stone, but Richmond dashed any hopes of a Tiger comeback in the eighth when Chiaravalloti drove in two runs with a single to right field. Clemson’s Schmidt drove in another run in the bottom of the eighth for the team’s last run of the game. Stauffer pitched a shutout ninth and picked up the save.

The two teams continue the series Saturday at 2:00 PM.