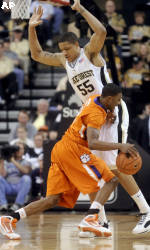 WINSTON-SALEM, N.C. (AP) -Al-Farouq Aminu broke out of his slump with 18 points and 12 rebounds, and Wake Forest continued its home dominance of Clemson in a 70-65 victory on Sunday that cost the Tigers’ a first-round bye in the Atlantic Coast Conference tournament.

Clemson would’ve secured the No. 3 seed if it was able to win at Joel Coliseum for the first time since 1990. But with top scorer Trevor Booker neutralized and the outside shots not falling, the Tigers (21-9, 9-7) slipped to the sixth seed and allowed Florida State to move into the third spot.

Demontez Stitt scored all 18 of his points in the second half for Clemson, which was 5 of 25 from 3-point range in its 18th straight road loss to Wake Forest.