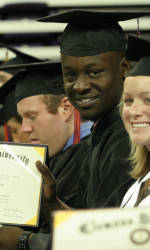 Clemson had five players taken in the NFL draft this year,its high total for a draft since six Tigers were taken in the 1999draft.

Four of the five have already graduated from Clemson.

Each of Clemson’s first three draft selections of 2007 werechosen by the same three teams who drafted Clemson players in 2006.And, each of the 2006 draft choices made their respective teamslast year so each Clemson 2007 rookie will have a former teammateon the field when they report to camp. Gaines Adams was taken bythe Tampa Bay Bucs with the fourth selection of the entire draftthis year and the Bucs drafted Anthony Waters was taken in thethird round by the San Diego Chargers, the same team that draftedDustin Fry was taken by the St. Louis Rams in the fifth round thisyear, the same team that drafted Tye Hill in the first round in2006. Hill played in all 16 games for the Rams last year and hadthree interceptions. Chansi Stuckey was taken in the seventh roundby the New York Jets. While the Jets did not take a Clemson playerin 2006, they did select Justin Miller in the second round in 2004.Miller was a Pro Bowl kick returner and starting cornerback in 2006with the Jets. Stuckey and Miller combined on a punt return for atouchdown against Wake Forest in the season opener of 2004 whenStuckey threw the key block on the sideline to spring Miller loosefor a 69-yard touchdown in Clemson’s 37-30 win in overtime. ChansiStuckey was chosen in the seventh round by the New York Jets. Hewas the second Clemson player taken by the Jets in the last threeyears (Justin Miller 2005 draft). The Jets did not take a Clemsonplayer between 1979-2004. Stuckey and Miller practiced against eachother during the 2004 season as Miller was a starting cornerbackand Stuckey was a starting wide receiver. Stuckey playedquarterback in 2002, as a first-year freshman and quarterback in2003. With Stuckey’s selection in the seventh round, Clemson hasnow had four wide receivers drafted since Tommy Bowden became thehead coach in 1999. Clemson did not have a wide receiver drafted inthe eight years prior to Bowden’s arrival. The other Clemsonreceivers drafted since Bowden became head coach are Rod Gardner(2001, Washington), Derrick Hamilton (2004, San Francisco) andAirese Currie (2005, Chicago). Anthony Waters was taken with the96th pick of the 2007 draft by the San Diego Chargers. That wasgood news for Waters, who played just one game in 2006 beforesuffering a torn ACL in the season opener against Florida Atlantic.Twenty-six of the last 27 Clemson players drafted within the top100 selections (since 1989), have gone on to make an NFL roster andplay in an NFL game. The only top 100 draft pick from Clemson whohas not played in an NFL game since 1989 is Donnell Washington, whowas injured most of the 2004 and 2005 seasons. (He was on theactive roster with Green Bay in 2005, but never appeared in agame.). Washington turned pro after his junior year, 2003. DustinFry was Clemson’s third player chosen in the draft as he was afifth-round pick of the St. Louis Rams. Fry is the first Clemsoncenter drafted since Curtis Whitley was a fifth-round pick of theSan Diego Chargers in 1992. C.J. Gaddis, who turned pro after hisjunior season, was a fifth-round selection of the PhiladelphiaEagles. He will be in the same defensive secondary as formerClemson All-American and six-time Pro Bowl selection Brian Dawkins.In fact, Gaddis is the first player Philadelphia has drafted fromClemson since Dawkins was a second-round pick (61st overall) in1995. Gaddis is the 15th Clemson player to enter the NFL draft witheligibility remaining and he is the 13th to be selected. RonaldWilliams (1992) and Corey Hulsey (1998) are the only two Clemsonunderclassmen to turn pro and fail to be selected. Hulsey stillmade it in the NFL and was a member of the Oakland Raiders in 2006.Williams played 10 years in the CFL. Of the previous 14 Clemsonplayers to turn pro with eligibility remaining, 12 of them havegone on to play in an NFL game. The only players who did not wereRonald Williams, who played his entire 10-year career in the CFL,and Donnell Washington, who was injured in 2004 and 2005. He wasnot on an NFL roster in 2006.