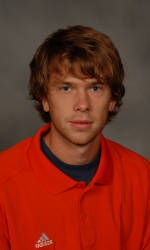 Clemson, SC – Clemson won five of the six singles matches in defeating The Citadel 6-1 in an indoor men’s tennis match completed late Sunday night. The Tigers improved to 2-0 with the victory and it was the season opener for The Citadel.

Clemson won the doubles points by winning all three of the doubles team matches. Clemson’s Rok Bizjak and Derek DiFazio defeated The Citadel’s Danny Dossetor and James Eason 8-3 at the number-one doubles position.

All six singles matches were decided in just two sets. The most competitive match took place at number-one singles where Dossetor defeated Clemson’s Ike Belk, 6-3, 7-5. Clemson’s Bizjak defeated The Citadel’s Alberto Diaz 7-5 in the first set then won the second set, 6-0. That was one of five 6-0 set wins for the Tigers in the match.

Clemson will next be in action this weekend when it plays four matches in the state of Texas, two on Texas A&M’s campus on Friday and two at the University of Texas on Sunday.