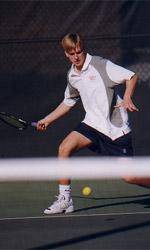 Bloomington, Minn. – The Clemson men’s tennis defeated Boise State 5-2 in the Tigers second match of the annual Ice Volleys Tournament at the 98th Street Racquet Club on Saturday night in Bloomington, Minn. With the win, Clemson improves its record to 3-2 on the season.

After falling to 18th-ranked Minnesota on Friday night, the Tigers responded in determined fashion against the Broncos. After winning two of the three doubles matches and capturing the doubles point, Clemson went on to win four of the six singles matches. Jamin, Micah, and Nathan Thompson were each victorious in their singles match and Sander Koning picked up an important win in the No. 6 position.

“I was very pleased with how we responded after a tough, hard fought loss to Minnesota on Friday night,” said Clemson Head Coach Chuck Kriese. “Our told our guys that they could either run and hide after a tough loss or they could use it as motivation to get better. They responded when they had too and I am extremely proud of them.”

The Tigers next action will be on February 16-17 in the Alabama Invitational in Tuscaloosa, AL.