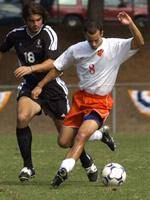 CLEMSON, S.C. – Clemson’s Paul Souders converted on a penalty kick with 12:44 left to go in the game as the Tigers defeated 18th-ranked South Carolina 1-0 in a men’s intercollegiate soccer match at Clemson, SC Sunday afternoon.

Clemson is now 5-4-2 overall, while South Carolina falls to 7-3 this season

“This was a good win for us,” said Clemson Head Coach Trevor Adair. “I am proud of our guys for finding a way to win. This win is good for our chemistry and our confidence because the next few matches are going to be tough. The injuries keep coming but from our setbacks, a player like freshman Stuart Holden starts and plays 90 minutes. He is a good player and not too many freshmen would play 90 minutes in a game like today’s match. Stuart has a bright future. I told my team at halftime they needed to be more physical and that they needed to step it up and they responded. We had great fan support today and we needed that.”

The Tigers will play at Virginia in an Atlantic Coast Conference match on Saturday, October 11, at 7:30 p.m. in Clemson’s next action.