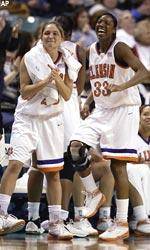 Clemson Defeats Maryland In First Round Of ACC Tournament

GREENSBORO, NC – Chrissy Floyd made both free throws with 1.2 seconds remaining to give Clemson a 63-61 win over Maryland in the first round of the ACC Tournament at Greensboro Coliseum in Greensboro, NC Friday night.

With the win, Clemson improves to 14-14 overall. Maryland falls to 10-18 overall. This marked the fourth game in school history that Clemson has won an ACC Tournament game in the closing seconds. The last time that Clemson won in the closing seconds in the ACC Tournament, was when former Lady Tiger Jackie Farmer tipped in the winning basket at the buzzer on March 2, 1991.

Floyd stole the ball with five seconds remaining in the game and drove the length of the court on the way to a layup. Renneika Razor fouled Floyd with 1.2 seconds remaining and Floyd hit both of the free throws to give the Lady Tigers the victory.

“I anticipated the pass,” said Floyd. “I tried to drive the left side for a layup but I was fouled and I was fortunate to make both free throws.” Clemson was led in scoring by Maggie Slosser with 12 second half points. Slosser scored all 12 of her points in the final 12:59 of the game. She was also the Lady Tigers’ leading rebounder with six. Amanda White and Julie Talley both scored 11 points each for the Lady Tigers. Floyd scored eight points and this was only the third time this season that Floyd has been held to single digits.

Maryland was led in scoring by Terri Daniels with 16 points. Razor finished the night with 12.

In the first half, Maryland opened a 5-0 lead in the first 3:17 of play and eventually opened a 18-11 lead with 6:12 left in the first half. The Lady Tigers came within two of the Terrapins 22-20 with 3:51 on the clock. The Terrapins maintained the lead for the rest of the half and took a 30-27 lead into the lockerroom at the intermission.

In the first half, Maryland outrebounded Clemson 27-9, 12-3 on the offensive boards.

Maryland outscored the Lady Tigers 10-6 in the first 6:22 of the second half to take a 40-33 lead with 13:38 left in the game. Angel Ross scored four points in this Terrapin run.

Both team had trouble with turnovers as Maryland had 23 and Clemson had 15. Maryland shot 21-54 from the floor in the game for a .389 pct. Clemson shot 23-58 from the field for a .397 pct. in the game. The Terrapins won the battle of the boards 42-25. Maryland had 17 offensive rebounds compared to Clemson’s eight.

“We were very fortunate to come out on the winning side,” said Clemson Head Coach Jim Davis. “I feel we can play better than we did today. Maryland disrupted our offense tonight and they did a great job defensively. We struggled in our offensive sets. Neither team shot the ball well. I felt that this team deserved a break, and for good things to happen to them. I am happy that something good happed to us tonight. Prime time players come through at prime times and Chrissy Floyd is a prime player who came through in the clutch.”

Clemson seeded seventh in the tournament will play second seeded North Carolina in the quarterfinal round at 4:30 p.m. Saturday afternoon.