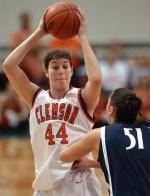 White was 9-15 from the field and 3-4 from the free throw line. She also had four rebounds and one steal.

Julie Aderhold and Maggie Slosser both scored 11 points each for the Lady Tigers. Chrissy Floyd and Khaili Sanders finished the game with 10 points each.

Maryland was led in scoring by Chrissy Fisher with 20 points. Fisher was 7-11 from the field and 3-5 from the three-point line.

Floyd is one point shy of tying Janet Knight for second place on the Clemson career-scoring list. Floyd now had 1,794 points in her career. Knight finished her career with 1,795 points in 1982-86.

The Lady Tigers won the battle of the boards 40-34. Clemson’s Tia Andrew had eight rebounds and Angel Ross of Maryland also finished with eight boards.

Clemson had a 19-9 lead midway in the first half as Sanders hit two free throws. The Terrapins cut the lead to five 34-29 with 2:13 left to go in the half as Fisher hit a three point basket. Vicki Brick hit a jump shot with :27 seconds left to keep Maryland within five and make the halftime score 38-33.

Maryland scored the first six points of the second half to take its first lead of the game 39-38 with 18:25 remaining.

The Tigers took the lead again and led 47-42 with 15:45 left as Amanda White completed the three-point play at the free throw line. Maryland came within one of the Lady Tigers, 50-49 with 12:41 left as Renneika Razor converted on a layup.

From this point, Clemson went on a 19-2 run and took a 69-51 lead with 5:48 left to play as Leah Roper made a layup off of her steal. Roper and White both scored four points each in this Lady Tiger run.

“I am happy with the way we played. Our intensity level was at its highest this season. I am very pleased in the way we played. Both teams shot the ball well, and this was a good win for our team. I am happy with the way our players came off the bench today and performed. Julie Aderhold, and Maggie Slosser did a great job off the bench. I was very happy with our inside game. Tia Andrew did a great job on both ends. I felt we kept pressure on Maryland today, and I was also glad to see us hitting our free throws.”

Clemson will play at North Carolina on Sunday, February 16, in the Lady Tigers’ next action. Game time is set for 5:30 p.m.