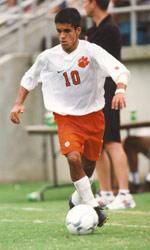 CLEMSON, SC – Fabio Tambosi had one goal and two assists in leading Clemson to a 3-1 win over Georgia State in an exhibition men’s soccer match at Clemson, SC Tuesday night.

The Tigers’ Steven Rhyne also had one goal and one assist for the night as well.

Clemson took a 2-0 lead with first half goals by Tambosi and Rhyne. Georgia State narrowed the lead to 2-1 when Justin Towns scored off an assist by Jamie Hargather at the 74:10 mark.

Clemson added the its third goal of the evening when Landy Mattison scored at the 87:10 point with an assist by Fabio Tambosi.

“This was a good preseason game for us,” said Clemson Head Coach Fabio Tambosi also had a great night as he was involved in every goal. Offensively, we need more support for Fabio.”

Clemson will open the 2002 regular season when the Tigers play Butler and Indiana at the Indiana Tournament on August 30-31.