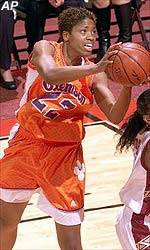 With the win tonight, Clemson finishes second in the Atlantic Coast Conference Standings. Clemson will be second seed in the ACC Tournament on March 2-5.

Clemson won the ACC regular season only one time in the 1980-81 season. At that time, ACC times played each other only one time. Since ACC schools started playing each other twice in a single season in the 1983-84 season, the best Clemson has finish was second in the 1997-98 season, when the Lady Tigers finished the ACC race with a 12-4 record. Under Head Coach Jim Davis the Lady Tigers have never finished under .500 in the ACC and have finished third five times.

In the first 12 minutes of the second half, the score was tied five times.

“I could not be more pleased with the effort of our basketball team,” said Clemson Head Coach Jim Davis. That was one of the most competitive games I have ever seen. Both teams played their hearts out. Florida State has been playing so well. I am very pleased with our defensive effort. To hold a team like Florida State to 49 points speaks well for our defensive effort.”