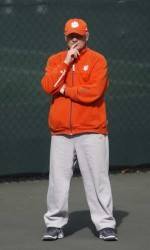 The 12-0 start is tied for the second best beginning of a tennis season in school history. The 1962 team also had a 12-0 record when starting that season. The 1969 team holds the school’s record for the best start as that squad finished the season with a 16-0 record and won the ACC Championship for the first time in school history.

Clemson will play host to William and Mary on Thursday, March 11, at 3:00 p.m. in the Tigers’ next action.

The 2010 season marks the 100th year of tennis at Tigertown. Clemson first sponsored men’s tennis in 1910.

“It was a hard fought and exciting match today,” said Clemson Head Coach Chuck McCuen. “UCF is a very good and well-coached team that will be moving up in the rankings. As a team today I felt we played a complete and focused match in singles after being dominated in doubles play. I am proud of our team and how they fought and competed.”