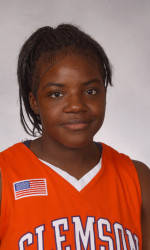 Staten Island, NY – Clemson rode a strong first-half performance on its way to an 80-50 victory over Wagner in women’s basketball action from Spiro Sports Center. The Lady Tigers (5-4) have now won four consecutive games after starting the season 1-4. The Seahawks fell to 0-7 overall with the loss.

D’Lesha Lloyd led a balanced Clemson offense with a career-high 12 points, all in the first half. She was 5-10 from the field, and also contributed two steals. Khaili Sanders, who sat out the past two games with an injury, returned to score a season-high 11 points. She also grabbed eight rebounds, seven of which were on the offensive end. Tasha Phillips was a third Lady Tiger to score in double figures. She had 11 points and shot 3-7 on three-pointers.

On the night, Clemson was 28-70 from the field and 8-19 from behind the three-point line. The Lady Tigers shot well from the free throw line (16-19). Clemson won the rebounding battle by a +15 margin, thanks in large part to a season-best 25 offensive rebounds.

Maddox and Phillips scored the first 15 points for Clemson, helping the Lady Tigers off to a fast start. The Lady Tigers created 13 turnovers in the half, leading to some easy baskets. As a result, Clemson shot a season-best 51.4 percent in the opening period. The Lady Tigers did so without Talley or Amanda White scoring a single point.

Clemson shot just 28.6 percent for the second half, but did connect on 5-10 three-pointers. Leading the way was Talley, who hit three quick long-range shots after being held scoreless in the first half. Clemson finished the game with 25 turnovers forced.

The Lady Tigers travel to Piscataway, NJ for a Saturday afternoon game with Rutgers of the Big East Conference. Tip-off is scheduled for 1:00 PM. Clemson defeated the Scarlet Knights 69-64 last season.