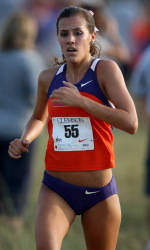 CLEMSON, SC – The Clemson cross country teams have taken to the road again, this time to take part in Friday’s Wisconsin adidas Invitational. The meet will feature an elite level national field, including 41 women’s teams for a 6,000-meter race and 40 men’s teams for an 8,000-meter competition. The races are scheduled for 2:00 and 2:40 PM Eastern time, respectively, and will be held at the Thomas Zimmer Championship Cross Country Course in Madison.

Nineteen of the top 30 nationally-ranked women’s teams, including Clemson, are slated to compete in the 6K on Friday. The Tigers were ranked 30th in the latest coaches poll on Oct. 3, but will have their hands full against some of the best squads in the country. Seven of the top 10 teams, including No. 1 Villanova and No. 2 Providence, will also be in town Friday.

Clemson is one of four schools from the ACC competing in the women’s race. The others are Boston College, No. 13 North Carolina and NC State.

The Tiger women have been led all season by a slew of upperclassmen. Alyssa Kulik has been the Tigers’ top finisher each of the last two meets, which included a fourth-place effort at the Clemson Invitational on Sept. 16. She was 23rd at the Notre Dame Invitational. Kim Ruck was Clemson’s No. 2 finisher in the home meet at fifth overall, and 50th place and third-best for the Tigers at Notre Dame. Kate Borowicz jumped into the mix with a 30th-place effort, second-best on Clemson’s squad in South Bend.

The remainder of the travel squad for Friday is Natalie Anthony, Elyse Borisko, Alyssa Henshaw and Cara Talty. Anthony has been a pleasant surprise for the Tigers this season, scoring in all three meets so far in 2011.

The men’s team will also face a stiff challenge. The Tigers will compete against two-thirds of the nation’s top 30 ranked cross country teams. Six of the top 10 teams will be in Madison, including the No. 2 ranked home favorites, Wisconsin. Clemson is one of three men’s teams from the ACC scheduled to race, alongside No. 29 North Carolina and No. 9 NC State.

Clemson’s Ty McCormack has been the team’s best performer all season. He won the Clemson Invitational on Sept. 16 with a personal best 8,000-meter time. He was by far Clemson’s best competitor at Notre Dame, crossing the finish line with a 32nd-place effort in South Bend. Martin Maloney will make his debut in a Clemson uniform Friday and will be joined by James Dwyer, Nathan Hendershot, Aaron Ramirez, Scott Stanley and Jonathan Sunde.