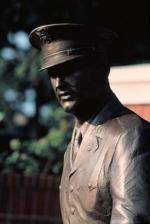 All veterans and their families are invited to Tiger Band’s 30 minute pre-game concert in the amphitheater 90 minutes prior to the scheduled kickoff. Following the mini-concert, the veterans will march to Memorial Stadium followed by the Clemson University Air Force and Army cadets and Tiger Band. Kickoff time will be set by the conference office by Monday, October 16. Fans attending the Maryland game are encouraged to bring American flags and line the parade route from the Amphitheater to the West Endzone of Memorial Stadium 60 minutes prior to kickoff as we salute our veterans and their families.

Dotting the “i” during Tiger Band’s pre-game ceremonies will be Clemson alumni now serving in the Air Force and Army National Guard and Reserve. Tiger Band’s pre-game show will include the arrival of a U.S. flag, a POW/MIA flag, a Tiger Paw flag and the game ball. A special introduction will feature former Clemson students, current students, faculty or staff members who have been deployed in Iraq, Afghanistan, or Bosnia/Kosovo.

The halftime show will feature a salute to all veterans in attendance who are asked to march onto the field, the laying of a wreath at Howard’s Rock by family members of a U.S. soldier who made the ultimate sacrifice while serving their country in Iraq, a 21 gun salute by the Clemson University Pershing Rifles followed by Taps by Tiger Band.

All veterans wanting to participate in halftime ceremonies should contact John Seketa by Wednesday, October 20, and then meet outside of Gate 10 next to the Clemson University Police Station with 10:00 minutes remaining in the second quarter to be given instructions on how to march into the stadium. There is no mandatory attire, (Class A, Class B, or a Military Appreciation t-shirt/sweater may be worn)

To help identify all current/former military personnel or veterans at the game, a commemorative t-shirt ($6.00) or sweatshirt ($17.00) may be purchased by placing your order through the Clemson Athletic Ticket Office. Shirts will be available for pick-up at the Clemson Athletic Ticket Office three hours prior to the kickoff of the Utah State football game on October 16 or daily beginning October 18, from 8:30 am until 4:30 pm.

We hope that 81,473 Tiger fans will be attendance as we gather again to recognize our nation’s military personnel and those who have made the ultimate sacrifice for freedom throughout the world.

I am a former and/or current Clemson University student, faculty or staff member who was deployed in Iraq, Afganhistan, or Bosnia/Kosovo.

Yes, I would like to purchase ___ ticket(s) to the game at a Special Military price of $14.00 per ticket

Add $3.00 for postage and handling if you would like the shirt(s) mailed to your home.

Make a check out to: Clemson Corps if you would like to purchase a t-shirt or sweatshirt.

Make a check out to: Clemson Athletics for ticket(s) to the football game.