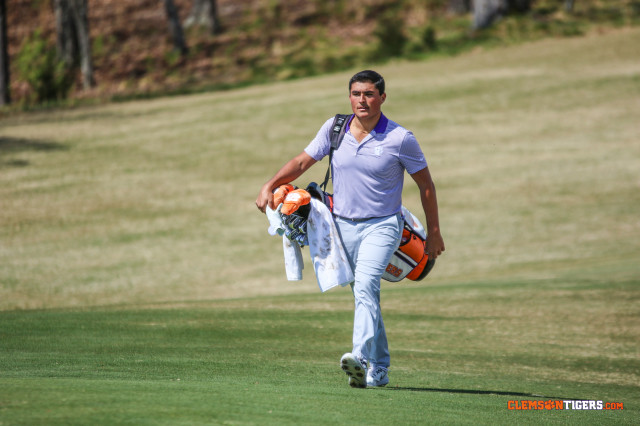 Clemson, S.C.—The 14th ranked Clemson men’s golf team begins three consecutive weeks of action on Saturday with a 36-hole day at the Cabarrus County Irish Creek Intercollegiate in Kannapolis, N.C. Clemson will be one of 15 teams in the field that includes ACC rival and third-ranked Georgia Tech.

The Irish Creek Intercollegiate is a two-day 54-hole event on the par 71 Club at Irish Creek course that is 7,099 yards in length. All 15 teams will begin play Saturday morning at 8:30 a.m. with a shotgun start.

Clemson’s lineup includes a junior, a sophomore and three freshmen. The Tigers are without the services of All-American Doc Redman who is playing in the Masters this week.

Bryson Nimmer and Turk Pettit will be the leaders for Clemson this weekend. Nimmer has a 70.06 stroke average with four top 10 finishes, and 11 rounds under par, including seven rounds in the 60s. The junior from Bluffton, S.C. is 23-under-par for the year and is coming off a seventh-place finish at Bandon Dunes.

Pettit has a 70.22 stroke average with three top 10 finishes, 12 under-par rounds, including seven rounds in the 70s. Pettit, the ACC Player of the Month for March, finished second at the Puerto Rico Classic and third at Bandon Dunes to lead Clemson at both events.

Colby Patton and Kyle Cottam are two more freshman in the Clemson lineup. Patton has a 72.07 average with two top 10 finishes and five under-par rounds. Cottam has a 72.44 stroke average with five rounds in the 50s. Patton finished seventh at the Puerto Rico Classic, helping Clemson to the team title.

William Nottingham rounds out the Clemson lineup as a sophomore. He has a 73.53 stroke average and is coming off a 26th place finish at Bandon Dunes.

After this weekend’s event Clemson will play host to the Clemson Invitational at the Cliffs at Keowee Falls Course in Sunset, SC April 13-15. The following weekend Clemson will compete in the ACC Tournament at The Old North State Club in New London, N.C.