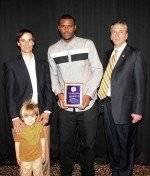 CLEMSON, SC – The Clemson men’s basketball team announced its 2009-10 awards winners at the annual year-ending banquet at the school’s Madren Center on Sunday. The Tiger coaching staff handed out awards to the team’s top performers and various support staff.

Clemson finished the season with a 21-11 overall record, 9-7 in the ACC. The Tigers advanced to the NCAA Tournament for the third consecutive year, earning a No. 7 seed in the East Region. It also marked the fourth straight season Clemson won 20 or more games, a school record.

Senior forward Trevor Booker led the way Sunday with three awards, including the Paul Bowie Most Valuable Player Award. It marked the second year in a row Booker was voted team MVP. He was a first-team All-ACC selection and a member of the ACC’s All-Defensive Team. He was the first Clemson frontcourt player since 1990 named to the ACC’s first team.

Booker also won the award for most rebounds for the fourth straight year. He pulled down 268 on the season, giving him 1,060 for his career. He finished his career ranked third in Clemson history in the category. Booker also won the team’s Road Warrior Award after averaging 14.1 points and 8.5 rebounds per game in true road games.

David Potter was named the team’s Defensive Player-of-the-Year. A senior who helped account for 93 victories in his four years with the program, Potter ranked fourth on the team with 41 steals. He was regarded as Clemson’s best on-the-ball defender.

Jerai Grant was honored with the Tom Lynch Most Improved award for the second straight season. He is the first Clemson player to receive the award in consecutive years since Mohamed Woni in 1997-98. Grant improved his scoring average (4.7 to 7.2 ppg) and rebound average (3.2 to 4.7 rpg), while also doubling his steal total (12 to 25) and increasing his blocked shot total (45 to 54).

Andre Young and Tanner Smith combined to receive five awards on Sunday. Young, a sophomore from Albany, GA, earned the team’s Free Throw Percentage Award after connecting at an 80 percent clip from the charity stripe. He also won the inaugural Spark Plug Award, given to a player who consistently provides a lift to the team. Smith, an Alpharetta, GA native, earned the team’s Academic Excellence Award, Mr. Effort Award and the Air Force ROTC Aim High Award.

Paul Bowie Most Valuable Player Award: Trevor Booker  First-team All-ACC selection, first by a Clemson frontcourt player since 1990.  Named to ACC’s All-Defensive Team for second straight season.  Ranked in the top 10 of the ACC in scoring, rebounding, field goal percentage, and blocked shots.  Ranked second on the team in assists with 82 from his power forward position.  Concluded his career by starting all 134 games, with a school-record 93 victories.  Ranks fifth in Clemson history with 1,725 points and third with 1,060 rebounds.

Defensive Player of the Year Award – Spartanburg County Clemson Club: David Potter  Ranked fourth on the team in steals with 41, giving him 99 for his career.  Often cited as the team’s best on-the-ball defender.

Road Warrior Award – Cherokee County Clemson Club: Trevor Booker  Led the Tigers in scoring with 14.1 points per game and in rebounding with 8.5 per game at road venues.  Led team with 32 assists and 17 blocked shots in road games.  Shot a higher free throw percentage on the road.

Most Assists Award – Union County Clemson Club: Demontez Stitt  Led the team this season with 94 assists, despite missing two games and playing injured through several more.  Second straight season he has led the Tigers in assists.  Season-high in assists was eight in a win over Western Carolina.

Free Throw Percentage Award – Greater Greenwood Clemson Club: Andre Young  Led the team with a 80 percent accuracy (min. 1 made free throw per game)  Shot a higher percentage during the ACC regular season at 84.6 percent.  Best single-game performance from the line this season was 8-for-9 in home win over Florida State.

Leading Rebounder Award – Greenville Clemson Club: Trevor Booker  Led the team in total rebounds (268) and in rebounds per game (8.4) for the fourth straight season.  Ranked fifth in the ACC in rebounds per game.  Finished his career as only the third player in Clemson history to collect more than 1,000 rebounds.

Air Force ROTC Award: Tanner Smith (Presented to the player who best exhibits the core values of the Air Force, as demonstrated by his integrity, service before self, and excellence in all endeavors)

Vigodsky-Nash Spirit of Clemson Basketball Award: Demontez Stitt (Presented to the player who most embodies the mission of Clemson basketball through his consistent leadership, team spirit, and selfless attitude)

Spark Plug Award – Anderson County Clemson Club: Andre Young (Presented to the player who consistently provided the team with a lift, both emotionally and physically)