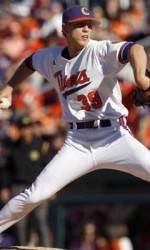 Notes Clemson, ranked as high as #24 in the nation, went 4-0 in four games this past week, including a Tuesday win over Florida Gulf Coast to wrap up the four-game series and a three-game sweep at Maryland over the weekend.

In game-four of the four-game series against Florida Gulf Coast on May 4 at Doug Kingsmore Stadium, Clemson scored seven two-out runs in the second inning on its way to a 14-2 victory. The Tigers used three walks to set up five two-out hits, including a grand slam by Mike Freeman, in Clemson’s seven-run second inning. The Tigers outhit the Eagles 15-6 and walked seven times. Kyle Parker went 3-for-4 with two doubles and two RBIs, while Brad Miller added three hits. Alex Frederick pitched 5.0 innings in his first start as a Tiger to earn the win. He allowed just four hits, one earned run, and two walks with six strikeouts.

Clemson swept Maryland by a combined score of 37-19 at Bob Smith Stadium from May 7-9. Clemson outhit the Terrapins .353 to .315 and totaled 42 hits, 11 doubles, four homers, 20 walks, and four steals. Parker paced Clemson by going 7-for-12 (.583) with three doubles, one homer, five RBIs, five runs, and four walks, while Miller went 5-for-9 with a double, three RBIs, three runs, and three walks. Freeman and Will Lamb added seven hits apiece and Jeff Schaus hit two home runs with five RBIs.

In game-one on May 7, Freeman went 4-for-5 with three RBIs to lead Clemson to an 18-6 win over Maryland. Lamb went 3-for-6 with two doubles, two RBIs, and three runs, while Parker went 3-for-4 with two doubles, an RBI, three runs, and two walks in the Tigers’ 18-hit attack. Clemson totaled seven doubles and a two-run homer by Schaus. The Tigers put the game out of reach with seven runs in the seventh inning. Casey Harman allowed two runs on six hits in 6.0 innings pitched to earn the victory.

In game-two on May 8, Miller went 4-for-4 with three RBIs to lead Clemson to a 12-8 victory over Maryland. The Terrapins held a 5-4 lead before Clemson took the lead for good with three runs in the sixth inning. The Tigers added two runs in the seventh and three runs in the ninth. Schaus and John Hinson each hit home runs in the ninth inning. Clemson totaled 17 hits, including at least two hits apiece by the top six batters in the lineup. Schaus added four runs, while Parker totaled three hits and a double. Frederick pitched the final 5.0 innings to earn the win.

In game-three on May 9, Parker hit a three-run homer in the sixth inning to give Clemson the lead and Tomas Cruz pitched 4.2 masterful innings in relief in the Tigers’ 7-5 win over Maryland. The Terrapins took a 5-3 lead with two runs in the fifth inning, but after the first two Tigers were retired in the sixth, Clemson rallied to score four two-out runs and take the lead. Cruz allowed just one hit, no runs, and no walks with four strikeouts to earn the win. Lamb led the Tigers with two hits, while Hinson added two runs.

On the mound, Frederick recorded two wins in his two outings (one start). In 10.0 innings pitched, he had a 2.70 ERA and seven strikeouts. Cruz allowed just one hit and no runs in 4.2 innings pitched in his one appearance on the week.

The Tigers will conclude their seven-game stretch away from home with four games on the road this week, starting Tuesday night against Furman at Fluor Field in Greenville, SC. Then over the weekend, the Tigers will play at Wake Forest.