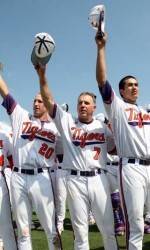 Notes The #22 Clemson Tigers went 4-0 in four home games this past week, including an 8-2 win over Presbyterian on Tuesday and a three-game sweep of #7 Florida State over the weekend to capture the ACC Atlantic Division title.

Jeff Schaus both hit two-run homers to lead Clemson to an 8-2 victory over Presbyterian at Doug Kingsmore Stadium on May 18. Stolz, who was making his first career start at shortstop, lined a two-run homer in the second inning, then Schaus blasted a long two-run long ball in the seventh inning. Wilson Boyd had a game-high three hits, while Kyle Parker added a double, RBI, three runs, two walks, and a hit-by-pitch. Starter Scott Firth pitched 5.1 innings, allowing two runs and no walks with six strikeouts to earn the win.

Clemson then swept Florida State by a combined score of 25-15 at Doug Kingsmore Stadium from May 20-22. Clemson outhit the Seminoles .343 to .216 and totaled 36 hits, a .426 on-base percentage, and seven stolen bases, while the Tiger pitching staff had a 4.33 ERA. Boyd went 5-for-9 (.556) with a homer, four RBIs, three runs, and four walks, while Brad Miller went 7-for-13 (.538) with a homer, double, five RBIs, six runs, two walks, and a steal. Stolz added six hits in 12 at-bats. Alex Frederick allowed just four hits and two earned runs with seven strikeouts while recording two victories.

In game-one on May 20, Boyd’s two-out, run-scoring single capped a three-run eighth inning to give Clemson a 9-8 win over Florida State. The Seminoles scored two runs in the top of the eighth inning to take the lead, but the Tigers used six hits, including a two-out, run-scoring double by Miller to tie the score, and Boyd’s game-winning single to take the lead for good. Tomas Cruz retired both batters he faced in the ninth inning to record the save. Miller went 5-for-5 with a homer, double, three RBIs, and four runs to pace Clemson’s 17-hit attack. Boyd went 3-for-5 with two RBIs, while Parker added two doubles.

In game-two on May 21, Clemson scored six runs in the third inning en route to an 8-4 win over Florida State. The Tigers used five hits and three walks to score six runs in the third, highlighted by a two-run single by Parker and a three-run double by Scott Weismann pitched 6.1 innings and allowed just three hits and three runs to earn the win. David Haselden pitched the final 2.2 innings to close out the game. The two sophomore righthanders combined to limit the Seminoles to only five hits.

In game-three on May 22, Frederick tossed 4.2 scoreless innings in relief of one-hit ball to lead Clemson to an 8-3 win over Florida State. With the victory, the Tigers captured the ACC Atlantic Division crown. The Tigers scored all eight of their runs in the first four innings, including three runs in the first inning and four two-out runs in the third inning. The Tigers outhit the Seminoles 8-6, including a team-high two hits by Stolz. Frederick allowed just one hit, no runs, and two walks with five strikeouts to earn the win.

The Tigers sport a 37-19 overall record and 18-12 ACC mark, which tied for first place in the ACC Atlantic Division standings with Florida State. By virtue of Clemson’s sweep of the Seminoles, the Tigers were crowned division champions, their first division title since 2006. Clemson, who is 27-8 at home, 8-10 in away games, and 2-1 in neutral-site contests, finished in a tie for fourth place in the overall ACC standings, behind Virginia (23-7), Georgia Tech (21-9), and Miami (FL) (20-10).

Clemson will travel to Greensboro, NC to play in the ACC Tournament at NewBridge Bank Park. It will be the first time the ACC Tourney is held in Greensboro. Clemson, the #2 seed, will play #7-seed N.C. State on Wednesday at 8:00 PM. After a day off on Thursday, Clemson will play #6-seed Virginia Tech on Friday at 4:00 PM. Then the Tigers will face #3-seed Georgia Tech on Saturday at 4:00 PM. All three games will be televised live by Fox Sports South. The squad in Clemson’s four-team bracket with the best record will play in the championship game on Sunday at 1:00 PM.