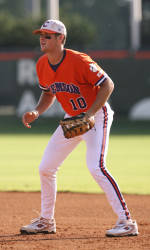 Notes Clemson went 0-5 in five games this past week, including falling twice in a pair of midweek games against Georgia and being swept at #2 Miami (FL) over the weekend.

Georgia won both games of a home-and-home, midweek series on April 1,2. The Bulldogs outscored the Tigers 17-7 and outhit Clemson .301 to .153. Ben Paulsen led Clemson with two hits in five at-bats along with a two-run homer.

Georgia scored nine runs in the first four innings and cruised to an 11-3 win over Clemson at Foley Field on April 1. Every Bulldog starter had at least one hit, as Rich Poythress and Joey Lewis both hit a home run and double to lead Georgia’s 13-hit attack. Clemson committed four errors and totaled just four hits. The Tigers put 14 batters on base, but they could only plate three runs. Wilson Boyd provided Clemson’s offensive highlight with a two-run single in the sixth inning. Lefthander Alex McRee pitched 4.0 hitless and scoreless innings with seven strikeouts in a scheduled short start to earn the victory.

Georgia scored two runs with two outs in the seventh inning to defeat Clemson 6-4 at Doug Kingsmore Stadium on April 2. The Tigers trailed 2-0 before Matt Sanders hit a two-out, two-run single in the second inning. The following frame, Paulsen hit a two-run home run. But Adam Fuller hit a two-run homer in the fifth inning to tie the score. Then in the seventh inning, Bryce Massanari and Lyle Allen both hit two-out singles to score runs. Paulsen had two of Clemson’s five hits, while Fuller paced Georgia with two hits and two RBIs. Steve Esmonde, the third of six pitchers used by Georgia, pitched 2.0 scoreless innings in relief to pick up the victory.

Miami extended its winning streak to 13 games by sweeping Clemson in three games at Coral Gables, FL from April 4-6. Miami outscored the Tigers 28-15 and outhit them .306 to .229. Hurricane pitchers combined for 41 strikeouts as well. Paulsen led Clemson by going 6-for-12 (.500) with a double, two homers, and seven RBIs in the series, while Boyd went 5-for-10 (.500) with three walks.

In game-one on April 4, Yonder Alonso hit a walkoff two-run homer to give Miami a 6-4 win over Clemson at Mark Light Field. The Tigers jumped out to a 2-0 lead in the first inning, highlighted by Paulsen’s run-scoring double. The Hurricanes then scored four runs in the second inning, capped by Blake Tekotte’s three-run homer. The Tigers scored single runs in the fifth and sixth innings to tie the score, highlighted by Paulsen’s home run in the sixth. But Alonso sent the Hurricanes to the win with a towering home run with one out in the ninth inning. Paulsen and Boyd had two hits apiece for the Tigers. Chris Hernandez and Kyle Bellamy combined for 16 strikeouts.

In game-two on April 5, Miami turned a 5-2 deficit into a 15-5 win over Clemson by scoring the game’s final 13 runs. The Tigers built the lead thanks in part to Doug Hogan’s two-run homer in the third inning. But Clemson left 11 runners on base in the first six innings, as the score was tied 5-5 in the middle of the sixth. Then, the Hurricanes scored two runs in the bottom of the sixth inning and eight runs in the eighth inning to break the game open. Yasmani Grandal went 4-for-5 with a home run, double, and four RBIs to lead the Hurricanes’ 13-hit attack. Boyd went 3-for-4, while Hogan totaled three RBIs for the Tigers, who left 13 runners on base, including eight in scoring position.

In game-three on April 6, Miami held on for a 7-6 victory to hand the Tigers their first ACC sweep since 2006. Clemson took a 2-0 lead in the first inning on Paulsen’s two-run single. But a Tiger error helped the Hurricanes score two runs in the fourth inning and take the lead for good. Dave DiNatale’s wind-aided, three-run homer in the fifth inning gave Miami a 7-3 lead. Clemson cut the Hurricanes’ lead to one run in the seventh inning on Paulsen’s two-run homer, but Carlos Gutierrez pitched 2.0 perfect innings to record the save. Paulsen went 2-for-4 with a homer and four RBIs, as each team had seven hits in the game.

Paulsen continues to have a hot bat, as he was 8-for-17 (.471) with five runs scored, one double, three homers, and nine RBIs in five games against two of the hottest teams in the country. Boyd went 6-for-15 (.400) with six walks as well.

Reliever Justin Sarratt was a bright spot on the mound for the Tigers this past week. In 4.2 innings pitched over two relief appearances, he allowed three hits, one run, and no walks with three strikeouts.

The pitching staff has a 4.58 ERA and .263 opponents’ batting average. Matt Vaughn is among the national leaders with eight saves in 15 relief appearances, while freshman lefthanders Craig Gullickson (2.08) and Casey Harman (3.28) have solid ERAs. Sarratt has a 2.31 ERA in 13 relief appearances as well.

The Tigers will continue their stretch of playing outstanding competition when they travel to Columbia, SC to take on South Carolina on Wednesday night in the third of four regular-season meetings. Clemson will then play host to North Carolina in a three-game series over the weekend.