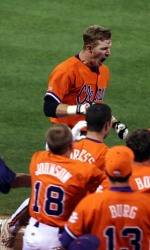 Notes: Clemson went 3-2 in five games last week, four of which were against teams ranked in the top 20 in the nation. The Tigers fell to Elon 13-12 in a slugfest on Tuesday, then trounced #5 South Carolina on Wednesday by a score of 14-5. Then over the weekend, the Tigers won two of three games over #19 Georgia Tech.

Elon used 12 hits and nine walks to defeat #17 Clemson 13-12 at Doug Kingsmore Stadium on April 24. After the Phoenix scored four runs in the top of the second, Clemson scored six runs in the bottom of the second, highlighted by Doug Hogan’s grand slam, to take a 7-4 lead. But Elon chipped away and eventually took a 13-8 lead. Back-to-back homers by Andy D’Alessio and Hogan, his second of the game, in the seventh inning along with a two-out, two-run single by Alex Burg in the eighth inning brought Clemson to within a run, but the Tigers could get no closer. Hogan totaled a game-high five RBIs, while Wilson Boyd added three hits. Clemson outhit Elon 13-12, but committed a costly error in the fifth inning that led to four unearned runs.

A seven-run seventh inning and 16 hits highlighted #17 Clemson’s 14-5 victory over #5 South Carolina at Doug Kingsmore Stadium on April 25 in the last of four regular-season matchups between the two rivals. Ben Paulsen’s three-run homer in the fifth inning put the Tigers ahead 9-3, and they never looked back. Boyd, who received the Bob Bradley Award for being Clemson’s MVP in the four-game series, was 2-for-4 with a triple and four RBIs. Taylor Harbin added three hits and three RBIs. All 10 Tigers who played in the field scored at least one run and nine had at least one hit. Starter D.J. Mitchell pitched 6.0 innings to earn the win, as he allowed just one run on four hits with six strikeouts.

Clemson, ranked #17 in the nation, won two of three games over #19 Georgia Tech at Doug Kingsmore Stadium from April 27-29. The Tigers outscored the Yellow Jackets 16-11 and outhit them .300 to .250. Hogan was 5-for-11 (.455) with a homer and three walks, while J.D. Burgess was 4-for-9 (.444) in the series. D’Alessio added four hits, including two homers, and three walks in the series. Clemson’s pitching staff had a 1.86 ERA and 27 strikeouts while allowing 16 walks and no homers. The three Tiger starting pitchers combined to allow just two earned runs in 16.0 innings pitched as well.

In game-one on April 27, Hogan’s walkoff homer in the 11th inning gave Clemson a 3-2 victory over Georgia Tech. The Yellows Jackets scored two runs in the 10th inning to break a scoreless tie, then the first two Tigers in the bottom of the 10th inning were retired. But pinch-hitter Alex Lee singled, Mitchell struck out but reached on a wild pitch, and Boyd singled to score Lee. All three batters had two-strike counts before reaching successfully. Mitchell later scored the tying run on a passed ball. Hogan then led off the next frame with a solo homer to left-center to give the Tigers the dramatic victory. Alan Farina pitched a perfect 11th inning to earn the win, while starter Daniel Moskos pitched 6.1 innings, allowing five hits and no runs with eight strikeouts.

In game-two on April 28, D’Alessio went 4-for-4 with two solo homers to lead Clemson to a 10-3 victory over Georgia Tech. The Tigers totaled 14 hits, as D’Alessio amassed his first career four-hit game and three runs scored, while Marquez Smith was 3-for-5 with three RBIs. Boyd, who hit two doubles, and Addison Johnson also added two hits apiece. The Tigers, who did not score more than two runs in any inning, scored in seven of the eight innings in which they batted, while Georgia Tech left 11 runners on base. Starter David Kopp picked up the win, as he allowed six hits, one earned run, and one walk with four strikeouts in 6.0 innings pitched.

In game-three on April 29, starter Ryan Turner pitched 5.2 strong innings to lead Georgia Tech to a 6-3 victory over Clemson. Turner allowed two runs on six hits to earn the win. The Yellow Jackets scored three unearned runs in the fourth inning and added another unearned run in the sixth to take a 5-0 lead. The Tigers rallied back to score two runs in the bottom of the sixth and one run in the eighth, but Clemson was only 2-for-14 with runners in scoring position and could not even the score. Clemson left 13 runners on base, including nine in scoring position. The Tigers outhit the Yellow Jackets 11-8, including a 3-for-3 performance with two walks by Hogan. Georgia Tech was aided by 10 walks and two hit-by-pitches.

The pitching staff had a 3.45 ERA and .268 opponents’ batting average during the week. In 47.0 innings pitched, Clemson allowed 30 walks with 44 strikeouts. Clemson fielded at a .976 clip as well.

Clemson will take five days off during the week for final exams before playing host to Boston College in a two-day, three-game series beginning Saturday night. When the Tigers resume action on Saturday, they will conclude the regular season with 12 games in 15 days. Seven of those 12 games will be away from home as well.