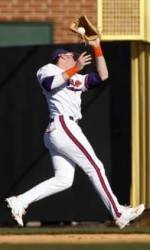 Notes Clemson, ranked as high as #20 in the nation, went 2-2 in four games at Doug Kingsmore Stadium this past week. The Tigers trounced USC Upstate 22-4 on Wednesday, then the Tar Heels won two close games to claim the series over the weekend.

Doug Kingsmore Stadium on April 21. Hinson hit two three-run homers and a solo shot, while Kyle Parker hit a grand slam and Mike Freeman added a three-run homer. Hinson became the 13th Tiger in history and the first since 2008 to hit three long balls in one game. Clemson scored seven runs in the second and seven runs in the third and never looked back. Every Clemson starter at least one hit, as the Tigers had 18 hits in all. Jeff Schaus went 3-for-5 with two doubles and three RBIs, while Freeman added four runs and four walks.

North Carolina won two close games over #20 Clemson in a three-game series at Doug Kingsmore Stadium from April 23-25. Clemson outscored the Tar Heels 16-15, but North Carolina outhit the Tigers .284 to .267. Parker led the Tigers by going 6-for-11 (.545) with a homer, double, three RBIs, and two walks, while Hinson added two doubles and a home run. Clemson also had a 4.33 ERA and committed just two errors in the series.

In game-one on April 23, Matt Harvey struck out 15 batters in a complete-game six-hitter to lead North Carolina to a 5-3 win over Clemson. Harvey allowed three runs and one walk in throwing 156 pitches. Nine of his 15 strikeouts were looking. Levi Michael went 3-for-4 with a homer, double, and four RBIs to lead the Tar Heels, who outhit Clemson 9-6 and scored all five of their runs on two-out hits. Hinson went 2-for-4 with a homer and two RBIs. Casey Harman allowed three earned runs in 7.0 innings pitched but took his first loss after not suffering a defeat in his previous 17 starts dating to 2009.

In game-two, which was suspended on April 24 due to inclement weather and was completed on April 25, Clemson rallied from a 5-0 deficit to defeat North Carolina 10-6. The Tigers scored six runs in the fourth inning to take the lead for good. Every Tiger starter had at least one hit, as both teams had 13 hits in the game. Parker went 3-for-4 with a homer, double, and two RBIs. Alex Frederick pitched 1.2 hitless and scoreless innings in relief to earn the win, while Will Lamb struck out the only batter he faced to record the save.

In game-three, pinch-hitter Brett Knief hit a two-out double to score Ryan Graepel in the ninth inning to lift North Carolina to a 4-3 win over Clemson. The Tar Heels scored three runs in the first, then Clemson tied the score with two runs in the second. After six scoreless innings, Graepel lined a two-out single and scored on Knief’s double to right-center. In the bottom of the ninth, Clemson loaded the bases with one out, but Chris Epps struck out to end the game. Dominic Leone pitched 8.0 innings in his first career ACC start. He allowed just one hit and no runs in his final 6.0 innings pitched after surrendering a leadoff single in the third.

During the week, the Tigers hit .321 with a .536 slugging percentage, .420 on-base percentage, 38 runs, nine doubles, seven homers, 22 walks, and three stolen bases. The pitching staff had a 4.25 ERA and .273 opponents’ batting average along with 28 strikeouts against nine walks in 36.0 innings pitched. The Tigers also had a .975 fielding percentage, committing just four errors.

On the season, the Tigers sport a 25-16 overall record, including a 20-7 home record, 4-8 road mark, and 1-1 neutral-site record. The Tigers, who are 11-10 in the ACC, are in third place in the ACC Atlantic Division standings behind Florida State (14-7) and Boston College (12-9). Georgia Tech (16-5) leads the ACC Coastal Division standings, while Virginia and Miami (FL) are tied for second at 15-6. The Tigers are tied with Virginia Tech for sixth in the overall ACC standings. One reason for the team’s recent struggles is its inability to win close games, as Clemson is 0-11 in its last 11 games decided by two runs or less, which includes seven one-run defeats.

Clemson will be off the next five days for final exams before it hosts Florida Gulf Coast for a four-game series starting Saturday night.