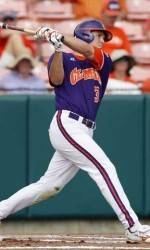 Notes The #22 Clemson Tigers went 2-2 in four games this past week, including a 12-1 win over Furman at Fluor Field on Tuesday night, then Clemson lost two of three games at Wake Forest over the weekend.

Jeff Schaus, Wilson Boyd, and John Hinson all hit home runs to lead Clemson to a 12-1 victory over Furman at Fluor Field in Greenville, SC on May 11. The Tigers scored seven runs in the fifth inning to break the game open, thanks in part to a two-run homer by Schaus and a grand slam by Boyd. Mike Freeman went 4-for-5 with two doubles to pace the Tigers, who had 14 hits. Hinson went 3-for-6 with three RBIs, while Boyd added five RBIs. Starter Scott Firth earned his first career win by tossing 6.0 innings, allowing six hits, one run, and one walk with four strikeouts. The Paladins failed to advance a runner past second base after the leadoff batter of the game scored.

Wake Forest then took two of three games over Clemson by a combined score of 25-24 at Wake Forest Baseball Park from May 14-16. Wake Forest outhit the Tigers .337 to .245 and totaled 10 doubles along with five home runs, while Clemson also hit five long balls. Brad Miller led Clemson at the plate by going 5-for-10 with two homers, four runs, and three walks. The Tigers committed just three errors and had a .972 fielding percentage.

In game-one on May 14, Wake Forest scored eight runs in the fourth inning to defeat Clemson 9-5. The Demon Deacons totaled six hits in the fourth, highlighted by Mac Wiliamson’s three-run homer to give them the lead for good. Williamson added a solo homer in the fifth inning. Meanwhile, starter Austin Stadler struck out 11 batters in 6.1 innings pitched and allowed just six hits and one run to earn the win. Hinson and Miller hit home runs in the ninth inning, but they were not enough to overcome the deficit. Clemson put more runners on base (17-15), but the Tigers stranded 11 on base against Wake Forest’s five.

In game-two on May 15, Clemson scored 10 runs in the fifth inning en route to a 17-5 win over Wake Forest. The Tigers took an early 3-0 lead on home runs by Kyle Parker and Miller, then the Demon Deacons scored three runs in the fourth inning to tie the score. But Clemson erupted for 10 runs on seven hits in the fifth inning and cruised to the win. Schaus went 3-for-5 with a triple, three RBIs, three runs, and a walk to lead Clemson’s 14-hit attack. Starter Scott Weismann pitched 5.0 innings to earn the victory.

In game-three on May 16, every Demon Deacon starter had at least one hit and Tim Cooney tossed 8.0 strong innings to lead Wake Forest to an 11-2 win over Clemson. Cooney, a freshman lefthander, allowed just four hits and two runs to shut down the Tiger offense. Meanwhile, Wake Forest’s offense posted eight combined runs in the first four innings. Ryan Semeniuk had a game-high three RBIs along with two hits, Mark Rhine totaled a game-high three runs, and Carlos Lopez added a two-run homer for the Demon Deacons, who had 14 hits. Miller had two of Clemson’s four hits. It was the Tigers’ worst loss to Wake Forest since 2001.

During the week, the Tigers outscored their opposition 36-26 and hit .268 with a .477 slugging percentage, .362 on-base percentage, four doubles, two triples, eight homers, 16 walks, and three stolen bases. The pitching staff had a 5.82 ERA and .301 opponents’ batting average along with 24 strikeouts against 16 walks in 34.0 innings pitched.

The Tigers sport a 33-19 overall record and 15-12 ACC mark, good for second place in the Atlantic Division behind Florida State (18-9). The top-two teams in the Atlantic Division will meet at Doug Kingsmore Stadium next weekend, as the Seminoles need one win in the series to win the division outright. Clemson, who is 23-8 at home, 8-10 in away games, and 2-1 in neutral-site contests, are in sixth place in the overall ACC standings, behind Virginia (21-6), Georgia Tech (19-8), Miami (FL) (19-8), Florida State, and Virginia Tech (16-11). Boston College is seventh at 13-14, N.C. State is eighth at 12-15, and North Carolina is ninth at 11-16. With Virginia’s walkoff win over North Carolina on Sunday, the Tigers clinched a spot in the ACC Tournament. Duke, Wake Forest, and Maryland are all mathematically eliminated from making the ACC Tournament. Depending on next weekend’s results, the Tigers’ possible ACC Tournament seeds are #2, #5, #6, or #7.

Clemson will return home to play its final four regular-season games at Doug Kingsmore Stadium next week. The Tigers will host Presbyterian on Tuesday night before nationally-ranked Florida State comes to town for a three-game series from Thursday to Saturday to close the regular season.